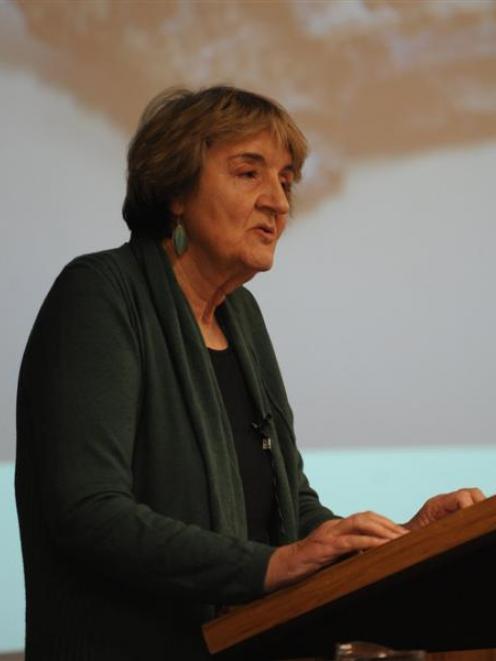 At an energy seminar in Dunedin, Parliamentary Commissioner for the Environment Dr Jan Wright speaks against the use of Southland lignite. Photo by Peter McIntosh.
Should Southland lignite reserves be used to create fuel and fertiliser, or will converting the low-grade coal to something more useful create more environmental harm than good?

That was one of the questions pondered at an energy seminar in Dunedin yesterday.

Parliamentary Commissioner for the Environment Dr Jan Wright, who is is already on record as opposing the use of lignite, said at the forum lignite had been described as having "the energy content of cow dung" and unacceptably large amounts of climate-warming carbon could be emitted from lignite conversion plants.

New Zealand was on track to miss its Copenhagen greenhouse gas reduction pledge "by a country mile", she said.

"Yes, we can buy carbon credits offshore to make up the difference. But being so dependent on carbon reductions in other countries is a poor look for a country that brands itself internationally as clean and green." Dr Wright said.

Carbon was being captured at some large plants overseas and either "scrubbed" free of carbon or stored in liquid or solid state.

Dr Wright said she "really hoped" the world could get carbon capture and storage to work but had been told the stream of carbon dioxide was not easy to capture when coal was burned to generate electricity.

Dr Whitney, who heads a World Energy Council project looking at energy demand through to 2050, said demand for diesel and other fuels was growing and would continue to grow, fed mainly by the increasing needs of China, India and Africa.

New Zealand could not ignore a lignite resource "in order of magnitude of the Maui gasfield", he said.

"If New Zealand doesn't use it, someone else will."

The seminar was the first of the series organised by the National Energy Research Institute.

About 70 participants had been expected but about half of them, including five speakers, were unable to get to Dunedin after flights were cancelled because of volcanic ash cloud.