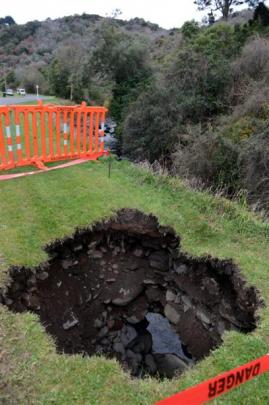 Malvern St, Woodhaugh, residents are sick of waiting for sinkholes caused by an eroding stream bank to be fixed. Photo by Peter McIntosh.

An angry Woodhaugh resident says he is ''sick of being fobbed off''' over an eroding stream bank he fears will lead to a major accident.

Gaping sinkholes have emerged on sections of the street above the bank as a result of erosion caused by the Water of Leith, which runs parallel.

The Malvern St resident, who did not wish to be named, said he first contacted the Otago Regional Council about the problem four or five years ago.

''But rivers and streams are looked after by the regional council.

''I've been contacting them regularly for three months now - not just ringing up but going into the office. How can you tell people about something so often? You can't talk to these people.''

The resident said accidents had occurred at the site in the past, and he warned if something was not done ''there's going to be a big one''.

''The residents of Malvern St are sick to death of being fobbed off. This wall needs to be fixed up.''

The wall would eventually collapse and cause a major issue, he said.

''When the whole wall goes, it will be a massive blocking of the river.''

An ORC spokesman said the ''scouring'' was within a Dunedin City Council reserve area and fell outside the ORC's Leith flood protection scheme.

DCC roading maintenance engineer Peter Standring confirmed the council was aware of ''three areas of concern'' in Malvern St where sinkholes had emerged.

The problem had now become one of urgency for the council.

''We're getting to the stage where we're getting some engineering advice from Geotech about how to get it fixed.''

When asked how long it would be before the problem was addressed, Mr Standring said ''hopefully, over the next six months''.

''But we don't want to guarantee anything.''

Erosion at the bottom of the bank created a void and that had led to the sinkholes appearing, Mr Standring said.

The erosion had developed over several years and was exacerbated by recent floods.

''Every time we get a mean sort of flood, it becomes a bit more wearing,'' Mr Standring said.

''There are bound to be other weaknesses all along there.''