Dunedin support workers rallied together in protest yesterday to fight against poor working conditions and they say the lives of clients are at stake.

The protest took place outside the office of Dunedin Labour MP and former health minister Dr David Clark, in Great King St, and was one of many around the country.

The rally called for an urgent pay rise for support sector workers, including in aged-care facilities, disability support, mental health and other roles.

The industry has legislation that sets the wages of workers according to their qualifications and experience. It expires at the end of June.

There were thousands of vacancies around the country and clients were not getting the level of care they needed.

The few workers that remained had a hugely increased workload for no extra pay.

"If you are tired and exhausted you make mistakes."

With fewer aged care facilities, those in need would not get the care needed to survive.

"People will die, it’s that simple," she said.

Workers often had their leave ignored or covered day by day and there was regularly a shortage of staff.

Many clients needing support to survive fell through the cracks, Ms Jefferson said.

They would be expecting support at the scheduled time, but no worker would be issued to come and see to them. 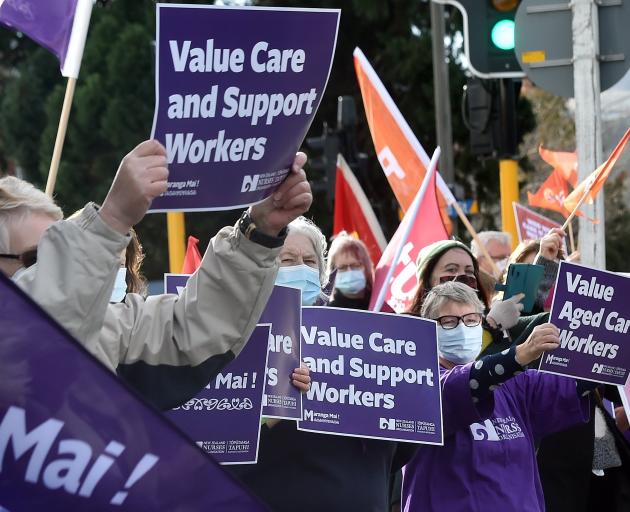 Support workers protest for more pay outside the office of Dunedin Labour MP Dr David Clark in Great King St yesterday. PHOTO: PETER MCINTOSH
Workers were expected to take their own cars to clients, and were only paid for fuel costs. Wear and tear was at workers’ expense.

The sentiment was backed up by home support worker Rebecca Miller, who said the job no longer appealed to young people due to the bad conditions and poor pay.

Grey Power Otago president Jo Millar said fixing the broken support system should be on the top of the Government’s list.

The system had been deteriorating for many years.

If things continued as they were people who would normally be able to function with care at home would need to be moved to hospitals.

It was also an issue with the constantly ageing population, as people in their 80s needed more care than those in their 70s.

More people needed care, but there were not more staff.

"If we don’t get this care the hospitals will not cope."