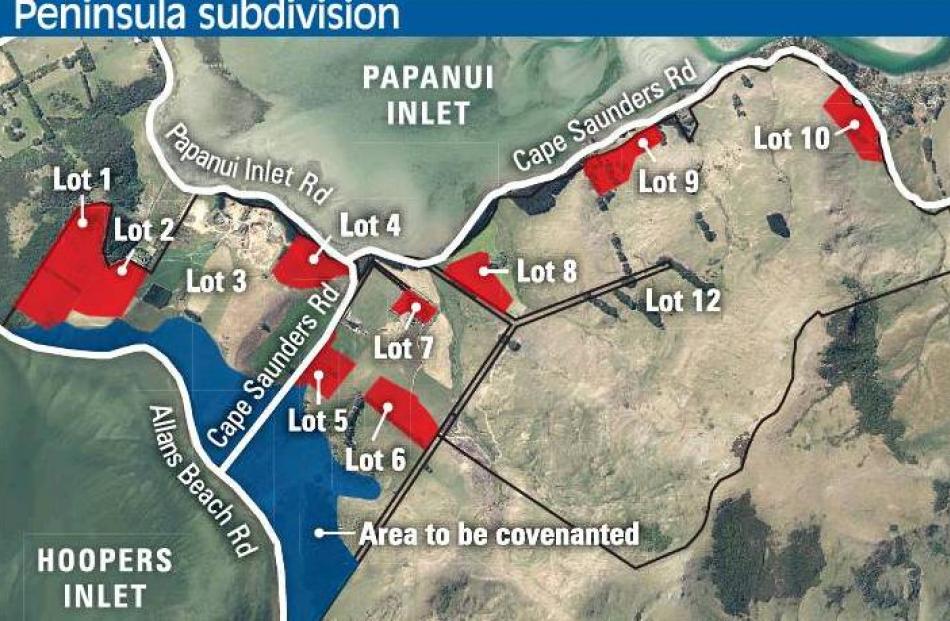 A plan to subdivide 260ha of rural Otago Peninsula land in an outstanding natural landscape area has run into serious opposition, as a resource consent bid heads for a March hearing.

Groups from Forest and Bird to Save the Otago Peninsula (Stop), and individuals from peninsula tourism and accommodation businesses, as well as astronomers and archaeologists, have lined up to oppose the project.

He said the farm on which the subdivision was planned had been dotted with farmhouses a century ago, and he wanted to protect his right to build there again.

The project is the work of the Peninsula Holdings Trust, made up of property owners Steven and Jacqueline Clearwater and Brian Hailes.

The trust has applied to the Dunedin City Council to subdivide the rural zoned land at 78 Cape Saunders Rd.

The land has a capital value of almost $1.9million.

The subdivision, on an isthmus of land between Hoopers Inlet and Papanui Inlet, and on the northern slopes of Mt Charles, would create 10  new sites of between 2ha and 194ha.

Consent was sought for residential activity on eight of the lots.

The trust’s application said the land had been farmed by the  owner’s family since  the late 1800s.

The application, prepared by Cubitt Consulting, said the eight new building sites would be located approximately  in areas of previous occupation to minimise adverse effects.

The sites would be "self-serviced" in terms of water, and effluent and storm water disposal.

Three larger lots would contain the working farm and quarry.

The applicant intended to covenant a wetland area by Allans Beach Rd, and provide public access to the Mt Charles summit except during lambing.

Mr Clearwater told the Otago Daily Times many of the submissions had been organised by the Papanui Hoopers Community and Environment Protection Group.

"They’re mainly all people who, funnily enough, already have lifestyle blocks down there. They already live there.

Considering the group had a Facebook campaign, he was "amazed" there were not 500 submissions.

Mr Clearwater said the area had homes on it 100 years ago.

"We’re not reinventing the wheel or anything; the farm is made out of those little dairy farms 100 years ago.

"We’re just wanting to protect the right to have houses on those blocks."

He said changes to the district plan had been "brought in by stealth" by the council, "and before you know it, it’s property theft".

"They’re just taking the right away to build your house."

Mr Robinson said what was proposed was "completely against" district plan rules. The group’s submission opposed the project because of the effect on the area’s peacefulness and tranquillity, its isolation and lack of human activity.

Roads in the area were unsafe, the land had many tapu and archaeological sites, and fragile wildlife.

Its submission included submissions from Forest and Bird and the New Zealand Sea Lion Trust, both of whom opposed the project.

Mr Robinson said he lived in the city, but had a property at Papanui Inlet.

Asked why others should not build there when he already had a property with a building, he said that was a fair question, but "that’s historic".

The house Mr Robinson  owned was built in 1911, and there have been no houses added since about 1920-30, apart from one that had been rebuilt.

Hooper’s  Lodge owner Fiona Harrison said the subdivision would be "completely" visible from the lodge.

The area was in a designated peninsula coast outstanding natural landscape zone.

"There’s a reason for that."

Elm Wildlife Tours supported the application, and said as a daily user of the area it saw "no detrimental effects" other than an increased need for road maintenance.

You should be able to 'dot' buildings about, picturesquely. It's over egging to say dp takes away property rights. You could also say the development may reduce the economic value of the Larnach and Hooper's Lodge operations.

I'm not surprised the locals felt they needed to band together to oppose him. Many of the locals live permanently in the area (they're not all holiday homes) so what he is trying to do will have a major impact on their lives and way of living, and the environment.