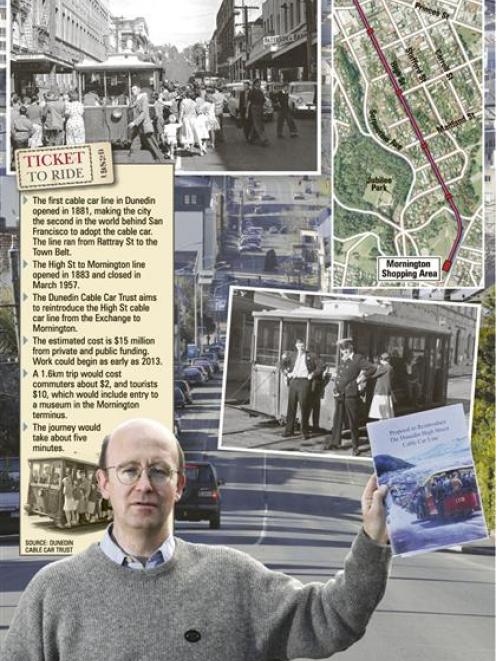 Phil Cole wants to see the return of cable cars to High St. Photo by Gerard O'Brien.
An ambitious plan to resurrect the High St cable car is gaining traction.

The Dunedin Cable Car Trust has been gauging public reaction to the project, as it prepares to launch a multimillion-dollar fundraising campaign later this year.

Chairman Phil Cole said the trust had spent the last three years planning the cable-car concept, including a recent meeting at Hillside Engineering to discuss making the track components and cable cars.

"We do want to keep everything we possibly can in Dunedin," he said.

From this week, 2000 questionnaires would be delivered to letterboxes in Mornington and Belleknowes to "get people talking about the project".

"We need community support in all its forms for this.

"We need people to put their name to the project," Mr Cole said.

The Dunedin-based transportation engineer said the trust would launch a major fundraising initiative in November to raise the estimated $15 million needed for the community project.

The first phase would be the construction of a $1 million cable-car terminus at Mornington Park, which would include a cafe, museum and cable-car storage area.

The bulk of the budget - $9 million - would be to build and install the cables and track system along the 1.6m route from Lower High St to Mornington Park.

The third phase would be the construction of the cable cars, which would be based on the original design but modernised to allow disability access and the transportation of bicycles, Mr Cole said.

Work on the terminus could begin as early as 2013, with the organisation seeking charitable trust status so as to apply for funds from the public sector as well as from private donors.

The trust would be able to support itself with a 30% occupancy rate of the cable cars, with 90% of those passengers expected to be Dunedin commuters.

The one-way trip would cost about $2, with a $10 fee for tourists likely to include add-ons such as entry to the museum, he said.

In addition to becoming a tourism attraction, and an additional transportation option, the reintroduction of a cable car on High St would be a boon for the Mornington and Exchange areas, Mr Cole said.