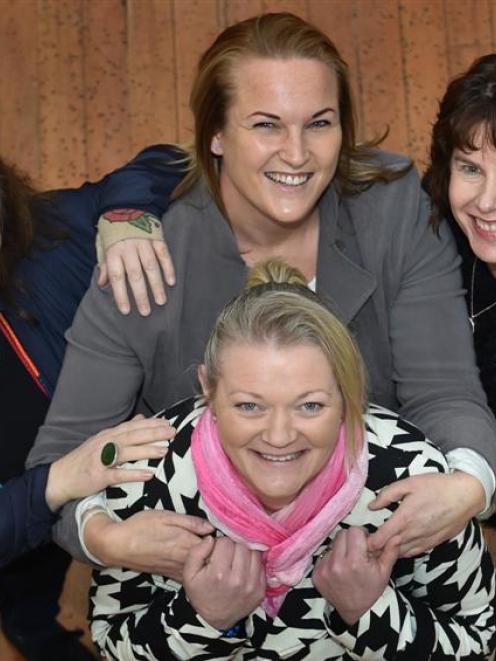 Dunedin breast cancer survivors, Delwyn Jope (front) has had part of her breast reconstruction surgery completed but (back from left) Jenny Sherman, Andrea Macnee and Marie Steele continue to wait and are happy more procedures are being planned. Photo by Peter McIntosh.
The more than 50 cancer survivors in Otago and Southland waiting for breast reconstruction have been promised surgery by the end of next year.

Four Dunedin women waiting are ''thrilled'' with the news, but hope it is not an empty promise.

Southern District Health Board surgical directorate medical director Stephen Packer said a plan was being developed to get the 52 southern women waiting for secondary or delayed breast reconstruction their surgery by December 2016.

The procedures would be completed at Dunedin Hospital, Southland Hospital and at private hospitals, he said.

''Because these are complex procedures, which take eight to 10 hours of surgery time, we are looking to secure additional theatre time in the private sector to help.''

Jenny Sherman (56), of Dunedin, said she had been on the waiting list since 2012 and the board planning more surgeries was ''fantastic'' news.

''That's exactly what should happen, and should have happened sooner, but I am thrilled this is going ahead.''

She declined breast reconstruction surgery last month. The offer came with a week's notice. The Dunedin Public Art Gallery paintings conservator was busy at work, and wanted her mother in New York to travel to Dunedin for support.

She remained at the top of the waiting list and would accept the next offer.

The Dunedin events specialist took the spot made available by Ms Sherman and had surgery at Mercy Hospital on June 16.

''It's made a huge difference in my life already. I would like to see them keep their word and get all these women through.''

However, her new breast was a B cup, and her other breast was an F cup, leaving her ''lopsided''.

She hoped the ''considerable size difference'' would be short term and the remaining surgery to reduce the size of the larger breast, and attach a nipple to the new breast, would happen soon.

''I don't want to wait another three and a half years having one little boob and one big one.''

''Actions speak louder than words ... I'm 100% doubtful because they keep on giving us different answers and the waiting list is just going to get bigger.''

Marie Steele (48), of Mosgiel, said the news was ''great''. She has being on the waiting list since October last year.

The Taieri College science technician said the board needed to communicate more and a letter with an expected timeframe would stop her feeling like she was waiting ''in the dark''.

''If it all goes through, it would be great to get to the end of a long road and get a bit of closure.

''If they can finish the job they started, that would be great. But we will see, we will see.''