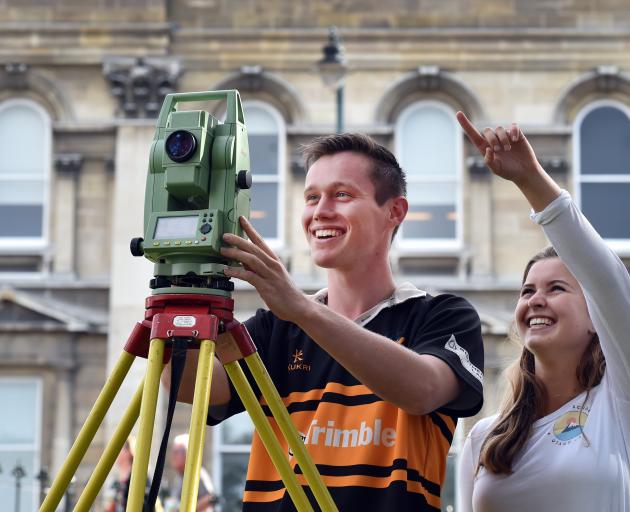 Fourth-year surveying students Jackson Clark (21) and Jess Smyth (21) with a ``total station'', which measures distances and angles in 3-D. PHOTO: PETER MCINTOSH
"Outdoor maths" is how a Dunedin surveyor describes his profession, but practitioners say surveying can encompass everything from laser scanning buildings to mapping the seafloor.

National Institute of Surveyors members and the University of Otago's surveying school celebrated the first Global Surveyors' Day in the Octagon this week, as a way to demystify the profession.

Otago is the only New Zealand university to offer a bachelor of surveying degree, and the surveying school has competitive entry into its second year.

Students, staff and alumni were present to answer questions from the public, and demonstrated a variety of surveying instruments.

Hydrographic surveying lecturer Emily Tidey said people saw surveyors out and about, but it was not a job that was widely understood.

"[We want to] show people some of the stuff that we need to do behind the scenes."

Mrs Tidey said since her specialty was in hydrography, she worked creating mapping and understanding the sea floor, and marine processes.

Other surveyors could specialise in different areas, such as landscape changes created by deformation, or they could focus on property planning, urban design, GIS mapping and legal boundary definition.

It was a good course to get into - nearly all fourth-year students were offered jobs before their final exams, she said.

"It's the art of spatial measurement."

Included in the demonstration were theodolite measuring instruments from the 1950s and 1960s, as well as more modern "total stations", set up on tripods, which could measure angles and distances in three dimensions, levels and global navigation satellite system (GPS) technology.

Fourth-year surveying student Jackson Clark said he wanted to go into the engineering and construction side of surveying.

He liked the fact the surveying school was close-knit, and that there were a lot of different challenges in the course.