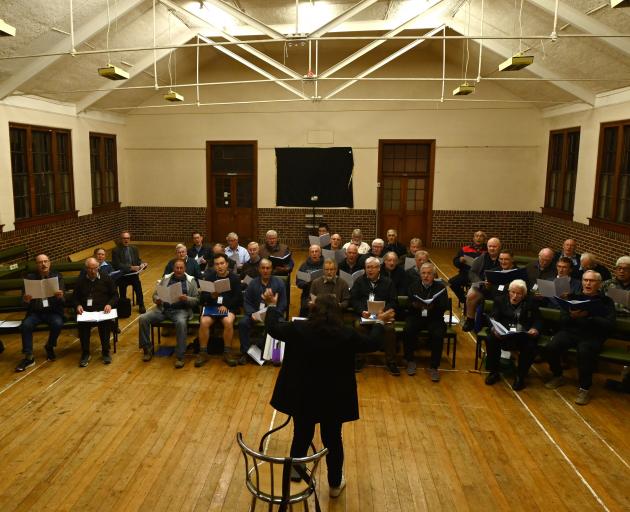 The Dunedin RSA Choir rehearses last night at the Caversham Presbyterian Church’s Sidey Hall. The choir will use a temporary rehearsal space before April 25, when it performs its centenary Anzac Revue in the Dunedin Town Hall. PHOTO: LINDA ROBERTSON
After nearly a quarter of a century at the Caversham Presbyterian Church, the Dunedin RSA Choir will rehearse for its upcoming centenary Anzac Revue without a permanent home.

The choir was given one week’s notice to end a long-standing rental agreement, weeks ahead of what would be a major performance for the choir of about 60 members, Mr More said.

The choir was approached by the church in October about a possible end to their agreement and he knew the choir’s time at the church premises was coming to an end, Mr More said.

When the RSA’s Burlington St premises closed, the choir and church exchanged letters and the choir had paid rent, on a six-monthly basis, with no end date for nearly 25 years, he said.

The rent was paid up until June.

Mr More felt the church should have given the choir at least 20 working days to vacate.

He acknowledged the church deservedly wanted a tenant that paid more than the $50 a week the choir paid.

"We don’t have a problem with that," Mr More said.

The choir had secured a temporary rehearsal space before the April 25 Centennial Concert, but where its new home would be remained unknown, he said.

Last year would have been its centenary Anzac Revue, but the event was cancelled because of Covid-19.

Attempts to contact the Coastal Unity Parish and the Caversham Presbyterian Church yesterday were unsuccessful.