By Elena McPhee
0 Comments
A former Cadbury's factory worker is preparing for the official launch of her Chocolate Queen and Chocolate King T-shirts, to raise money to help those suffering from mental health issues after being made redundant.

Megan Fairley originally created the T-shirts for her second-floor nightshift leavers team, who were among the 350 workers in Dunedin to lose their jobs in 2018.

Since then the former frontline shift leader has been selling them to raise money for Mike King's mental health charity I Am Hope, to help people battling mental illness as a result of redundancy.

A "soft launch" of the shirts, including advertising on social media, has generated sales around the country.

Ms Fairley, who also sells high-end fashion via her Notion Fashion platform, said T-shirts, information and publicity videos telling the story of Notion and of the layoffs at Cadbury's and their effect on the workers, would go to national media this week. 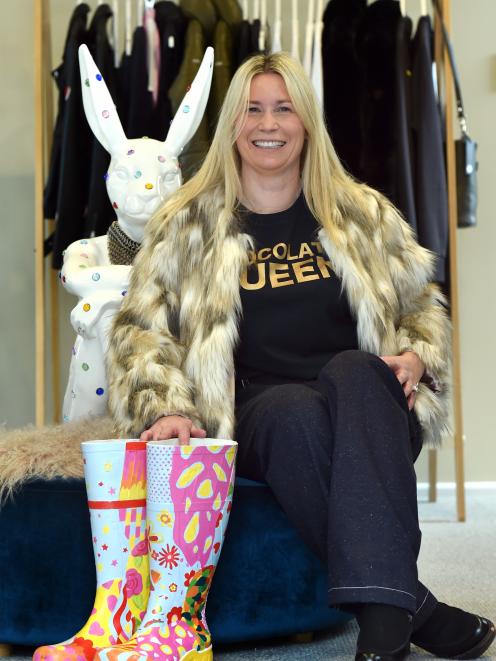 Notion Fashion owner Megan Fairley in her concept room, wearing one of her Chocolate Queen T-shirts which will be officially launched this week. PHOTO: PETER MCINTOSH
Ms Fairley, who had her own mental health issues after being made redundant, said the layoff was "horrific".

She was at the factory for 17 years; her partner had been there for 36.

"It was his whole life," she said.

"You just become so vulnerable."

All profits were going to I Am Hope, she said.

By the time the factory closed, many New Zealanders had forgotten Cadbury's was internationally owned and she thought that was because of staff.

She said the company had lost touch with the people at the heart of its brand.

Ms Fairley has been working with Otago Girls' High School, which had given her 800 cards with messages of support.

That had inspired her to get ex-Cadbury workers to create their own messages, to go on the swing-tag and the T-shirts' inside labels.

Publicity videos for the launch had been shot by Dunedin company 11Eleven, involving Ocho chocolate factory.