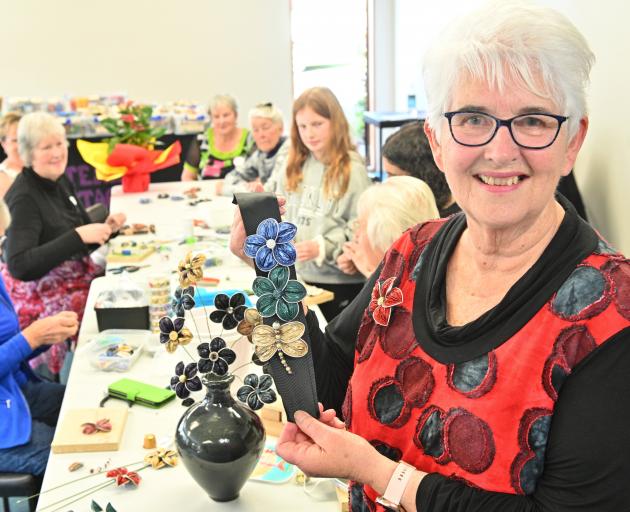 The event, which was cancelled twice this year due to Covid-19 restrictions, attracted about 130 people, who learned a range of stitches in nine different classes, including one with an environmental twist.

Tutor Jan Letts was teaching participants how to make dragonfly and flower brooches out of used coffee pods.

"You’ve got to recycle them some way," she said.

The idea came to her about 18 months ago, and her husband had built two different contraptions to crush the pods, one of which was called the "le pod popper", Mrs Letts said.

"It is quite therapeutic to bash [the pods] like nothing else," she said.

Once shaped, the coffee pods are stitched together and attached to a safety pin to create the brooch.

It was the first time in a long while the guild was able to reach out to the community, following lockdown and the transitions through the alert levels.

"It is quite special for the people who are here today — they are having a lovely time."

Glenise Terry, of Dunedin, had made about seven organza flowers, and was not finished.

"It is the best fun I’ve had for months."

Members of all of the regional guilds, from South Canterbury to Invercargill, also took part in the event.