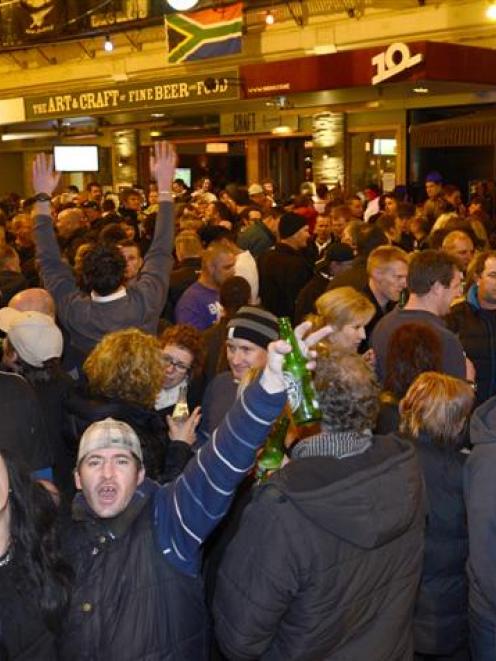 A crowd gathers in the Octagon after the test to continue the celebrations. Photos by Peter McIntosh.
Not only did Forsyth Barr Stadium get the thumbs up from the All Blacks, the rugby test against the Springboks on Saturday was great for the Dunedin retail and hospitality sector, with many tills ringing red-hot over the weekend.

All Black captain Richie McCaw said he was a huge fan of the stadium, after playing his first game at the venue on Saturday night.

"I loved it. You could not get a better rugby stadium in the world," McCaw said after the game. 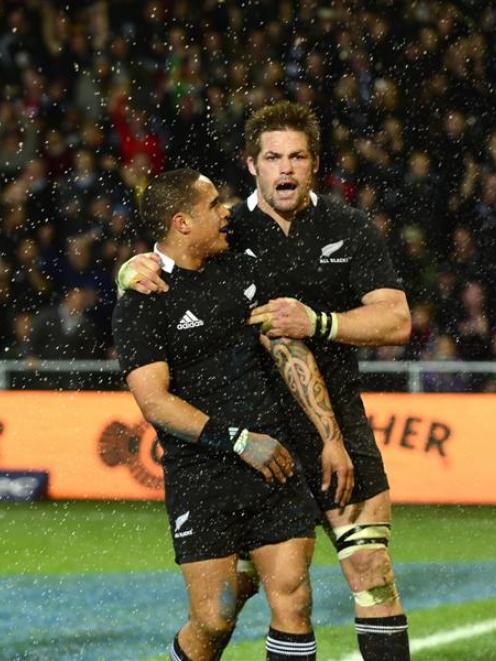 Aaron Smith (left) is congratulated by All Black captain Richie McCaw and gets sprayed by beer from the crowd after scoring a decisive try in the 21-11 win over South Africa in the rugby test at Forsyth Barr Stadium in Dunedin on Saturday night.
Dunedin businesses shared that love as thousands of rugby fans flooded into the city and boosted turnover in many bars, restaurants and retail outlets by up to 400%.

While bar owners and managers in the Octagon said the weekend was as busy as the Rugby World Cup last year, some others further away from the city's social hub said it was even better.

Eureka Bar and Cafe owner Sharleen Smith said Saturday brought the largest turnover the North Dunedin business had recorded in the past decade.

"We had 400% more turnover than a normal Saturday - more than our biggest day at the World Cup.

"The keys on the till got pretty hot.

"Even today [Sunday] is really hectic."

Susan Lee, owner of Angus Restaurant, Angus Cafe and Desserts, and Angus Burger, said turnover at the George St businesses had increased by between 30% and 40% over the weekend.

"We ran out of buns at the burger bar at 3am on Sunday.

"The last time that happened was when the World Cup was on."

Retailers on George St also reported a busy weekend, with many ringing up increases of up to 40% in turnover.

Scenic Hotel Southern Cross general manager Richard De Graaf said accommodation in Dunedin had been booked out for more than a month before the game, and some fans had been so desperate to see the game they had taken accommodation as far away as Balclutha and Oamaru.

"This only happens when there's a test match on or a major event like Elton John.

Tourism Dunedin chief executive Hamish Saxton said Dunedin had provided a warm, friendly and entertaining experience for visitors and had been given glowing references in television coverage of the event.

He hoped it would attract more visitors and international events to the city in the future.

"It has to make Dunedin the very best place for a test match experience.

"Visitors will have taken away a positive experience. That has to be good for Dunedin's reputation for hosting events," Mr Saxton said.

Police arrested about 20 people in Dunedin on Saturday night for alcohol-related disorder, as thousands of people kept officers busy after the test.

The lower Octagon was closed to traffic, allowing bar patrons extra room to drink during and after the sold-out game.