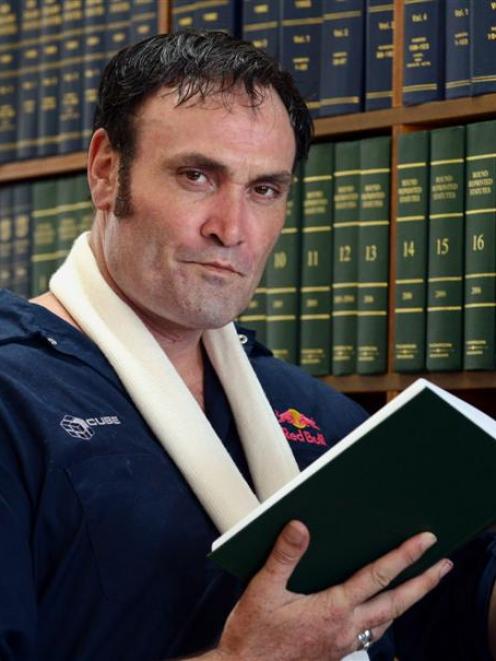 Jonathan Dixon is defending himself at the Supreme Court later this month. Photo by Gerard O'Brien.
Jonathan Dixon - the man at the centre of ''Tindallgate'' - says he would have been behind bars if he had followed the advice of his lawyer.

Instead, the Dunedin bouncer is studying at the University of Otago's Hocken Library as he prepares for his biggest legal fight.

This month, he will appear in the Supreme Court to appeal his conviction of dishonestly obtaining CCTV footage from a Queenstown bar in 2011.

Dixon was sentenced to four months' community detention and 300 hours' community work when he appeared before Judge Kevin Phillips in the Invercargill District Court in 2013.

''I didn't lose that case,'' he said yesterday.

That same year, he pulled off a legal coup by successfully defending himself against two serious assault charges from a Queenstown nightclub incident in 2012.

Mr Dixon, who studied biomechanics in preparation for the trial, decided to defend himself after his original lawyer recommended he pleaded guilty and spend ''three to four years inside''.

''I would be inside right now if I had taken advice from that lawyer.''

He used that experience to motivate himself for the appeal in Wellington, but remained concerned about other people in the court system who may have been given poor advice, he said.

''It cannot be an anomaly that I have had four lawyers, and each of those lawyers has run their own defence, not my defence, and by law it is meant to be my defence.''

Mr Dixon, who is involved with the IT industry, said he had spent hundreds of hours preparing for his case.

''Everyone puts their freedom in the hands of a complete stranger. I can't do that.''

At the Supreme Court he wanted to highlight his experience with lawyers, and ''I want a retrial to clear my name.

''I want to go back to court and I won't have a lawyer and I will represent myself and I believe I am going to win.''