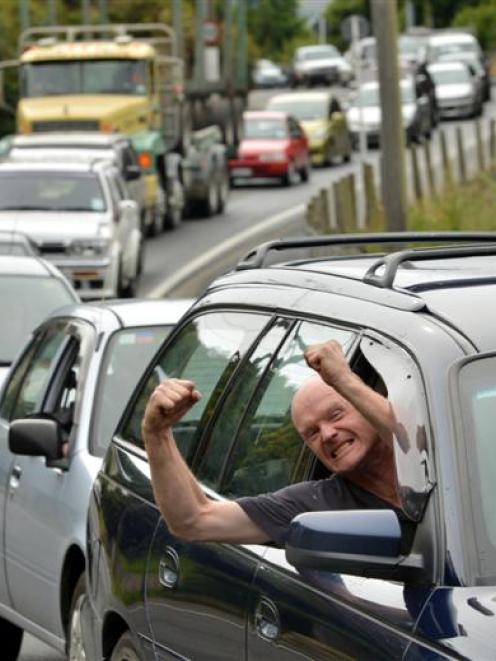 The snarl-up, on the only direct route between Port Chalmers and the central city, prompted an apology from the New Zealand Transport Agency, after problems at Ravensbourne snowballed into yesterday's traffic chaos.

That came too late to prevent queues of ''scathing'' cruise-ship passengers forming at Port Chalmers while they waited for buses caught in the congestion, Taieri Gorge Railway chief executive Murray Bond said.

It also prompted a warning from Mr Bond, after more than 50 cruise-ship passengers missed train trips as a result.

The missed bookings had cost the company about $5000, and he planned to seek compensation from the NZTA, he said.

With four more cruise ships expected today and tomorrow, the roadworks would need to be ''perfect'' to cope with the influx of visitors, he warned.

''My God, if that road is not perfect, there's going to be massive problems.''

His comments came after commuters heading to work yesterday morning found themselves ensnared in a queue of hundreds of cars, buses, trucks and emergency vehicles stretching back kilometres.

The week-long resealing project - from 100m east of the Parry St roundabout to the Ravensdown fertiliser works - began on Saturday and had been publicised in advance by NZTA staff.

Work was supposed to be carried out during the hours of darkness and the road reopened by 6am each day, but one lane remained closed until after 8am as work continued yesterday.

As a result, some motorists used to a 10-minute trip into the city instead found themselves stranded for more than an hour, as the queue stretched back from Ravensbourne to St Leonards.

Others found it quicker to drive from Sawyers Bay to the central city via Waitati, rather than wait for the traffic to clear.

Some of those stuck in the queue vented their frustration at contractors, while others wound down their windows to tell the Otago Daily Times the situation was ''madness'' and ''complete incompetence''.

Sawyers Bay resident Patrick Best (42), after being stuck in the queue for an hour, asked why warnings were not broadcast on the radio.

''I thought it was terrible ... whoever organised it, that was a shambles.''

NZTA senior network manager John Jarvis said the lack of warning was one of the lessons learned yesterday.

''We should have got a message out to the public,'' he said.

He also apologised for the delays, saying the problems stemmed from ''soft spots'' found under the old asphalt that warped, forcing motorists to slow down and queues to build up.

Any delay over 10 minutes was ''unacceptable'', he said.

''We acknowledge there was a major issue here.''

Downer Otago Southland general manager Mike Costelloe said his staff had overlooked the soft spots as they worked through the night.

The problem was noticed only about 7am, by which time it was too late to fix them before traffic began to build, he said.

One lane remained closed while a temporary seal was added on top of the soft spots, and congestion did not clear until about 10.30am, he said.

''The mistake was not identified we had a problem earlier in the night,'' he said.

Both men said the problem had been addressed, and would not be repeated, as work continued into next week.

Mr Bond said the loss of paying passengers was ''another blow'', following the cancellation of three cruise ship visits earlier this season.

Passengers left waiting for buses at Port Chalmers, and those who missed their train rides after booking up to a year in advance, had been ''particularly scathing of Dunedin'', he said.

Passenger Transport director Kayne Baas agreed the city's reputation had taken a ''bit of a knock'', and said the queues of cruise ship passengers left waiting at Port Chalmers were ''pretty massive''.

His company had to put on extra buses to provide scheduled tours of the city and ferry cruise ship passengers to and from Port Chalmers, which also came at a cost, he said.

''It was pretty stressful for the cruise ship, the passengers and ourselves.

''You've just got to hope that they [passengers] see the reasonable side of it and people just relax a little bit and understand it.''