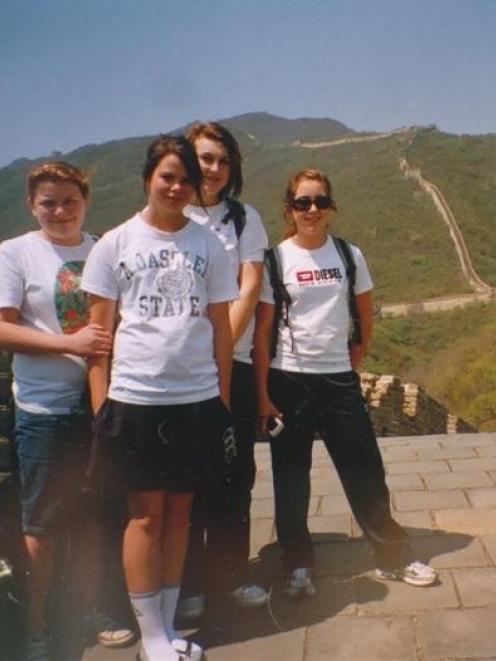 Year 12 Columba College pupils (from left) Rebecca Taylor, Anna Oliver, Hannah Hunt and Kate Manson on the Great Wall.
If the goal of a school field trip is to stimulate interest in a subject, then a recent Columba College trip to China was a huge success.

Not only did 25 pupils learn about Chinese language, culture and history, they also gained an insight into daily life in some of the world's biggest cities.

Most pupils would like to return to China, and many would be interested in furthering their knowledge of the language.

The pupils, accompanied by the principal Elizabeth Wilson, the deputy principal and the junior school dean, spent three weeks in China in April , where they visited Shanghai, Hangzhou, Suzhou, Xian and Beijing.

This was the first Columba College school trip to China.

The trip was designed as an educational and cultural experience, which would also strengthen ties with Columba's sister school in Shanghai, Datong High School, Miss Wilson said.

"The 25 girls came from years 10, 11 and 12. They all got on very well together throughout the trip and were a pleasure to be with," she said.

For Chinese language pupils, the trip provided an opportunity to improve their skills and augment their vocabulary.

Their host families in Beijing also enjoyed the opportunity to practise speaking English.

"I would really like to speak [Chinese] fluently. If I'm good enough, I might try to study at university in China," she said.

Apart from becoming conversant in Chinese languages, she would like to be able to recognise "a few thousand characters".

One of the most challenging aspects of learning the language was becoming familiar with the tones, and hearing native speakers conversing about everyday occurrences was very helpful.

From Auckland, the group flew to Shanghai and were guests of Datong High School for a week.

Pupils and staff were accommodated at the school's boarding-house and enjoyed their generous hospitality and aspecial itinerary organised for the pupils, Miss Wilson said.

Highlights included a welcome ceremony and dinner, trips to the Oriental Pearl TV Tower, the Bund, the Yu Gardens, a night cruise on the Huangpu River, the Jade Buddha Temple, an acrobatic show, the Shanghai Museum and Science and Technology Museum and day trips to Hangzhou which is renowned for its beautiful scenery.

They also visited the Lingyin Si Temple (one of the largest temple complexes in China) and Suzhou, an area renowned for its traditional Chinese gardens and silk production.

Miss Wilson said pupils attended the solemn weekly flag-raising ceremony at Datong High School, which was attended by all pupils and staff.

The pupils also enjoyed the special folk dancing and cooking and Chinese folk song classes organised for them.

Several of the girls in the group enjoyed meeting pupils they had hosted in Dunedin last year, when a Datong High School group visited Columba for three weeks.

From Shanghai, the group flew to Xian (one of the most important cradles of Chinese civilisation and the beginning of the Silk Road) for four nights.

There they visited some of China's best-known tourist attractions, such as the terracotta warriors, the mausoleum of Emperor Qin Shi Huang, and the Great Mosque (Xian has a large Muslim population), and the City Wall of the Ming dynasty, which is the largest and most intact city wall left in China.

The girls enjoyed being in a smaller city after the 17 million population of Shanghai and the opportunity to bargain with vendors in Xian's extensive markets.

During the final seven days of the trip, pupils stayed in Beijing with Chinese families, and experienced day-to-day life in a large city, and came to grips with travel by underground and bus, and catching taxis.

Tori Hall (16) said apart from learning about the culture and language, the trip was beneficial as it "got [her] out of her comfort zone", and reminded her of the need to travel and experience different cultures.

She would feel more confident about travelling overseas in future.

In Beijing, highlights for pupils included visits to the Forbidden City, Tiananmen Sq and the Great Wall at MuTianYu.

They also visited areas which will soon be familiar to Olympic Games viewers the world over, the Birds Nest (stadium) and the Water Cube.

Pupils and staff were struck by the volume of human traffic at many of the tourist attractions, particularly the Forbidden City, the former Imperial City, Beijing, which the Chinese tourist authority says receives almost 10 million domestic and foreign visitors each year.

At many of these attractions, while pupils and staff were taking photographs, they found they become they attracted attention themselves, and at one stop posed for about 30 minutes while Chinese tourists took photographs.

Two teachers from Datong will visit the school this year during a two-week exchange.

Columba pupils will return to China on a cultural and languages exchange trip in 2010.

The school first offered Chinese language classes as an extension activity in 2006, and last year, offered classes to all year 7 and 8 pupils.

It is an option subject at year 9 and 10 this year, and will be offered to year 11 next year, and senior groups in subsequent years.

Miss Wilson said the programme recognised Chinese as a "language of the future", and Japanese would be gradually phased out as the Asian language offered at the school.

• According to online sources, the Chinese written language uses characters which are logograms: each symbol represents a semanteme or morpheme (a meaningful unit of language), as well as one syllable; the written language can thus be termed a morphemo-syllabic script.

• A well-educated Chinese today recognises about 6000 to 7000 characters and about 4000 of them are required to read a mainland newspaper. The Chinese Government defines literacy as a knowledge of 2000 characters. A large, unabridged dictionary, such as the Kangxi Dictionary, contains more than 40,000 characters, including obscure, variant and archaic characters; only about 25% of these are in common use.