By Hamish MacLean
0 Comments
A video of a body boarder wildly swinging his board at a New Zealand sea lion at a Dunedin beach reveals ignorance of the threatened species, a Department of Conservation biodiversity ranger says.

The video, taken by Darryl Jones, shows a body boarder engaging with the wild animal at the water’s edge on the beach near the St Clair Hot Salt Water Pool yesterday morning.

As the man backs away from the animal, near the base of the sea wall the gap between the two closes and he swings his board twice at the animal. 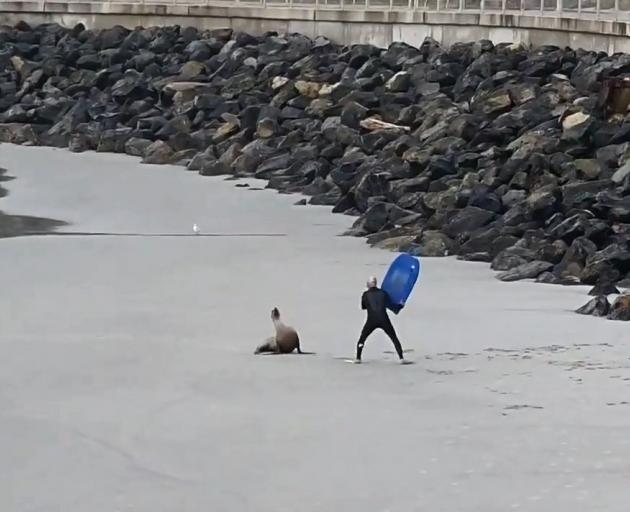 A body boarder raises his board when confronted by a juvenile New Zealand sea lion at a Dunedin beach yesterday in a screen shot from a video posted on social media. PHOTO: DARRYL JONES

Mr Jones said he noticed the body boarder being prevented from entering the water by a waiting sea lion moving from side to side before he started filming.

If the person in the video had walked away and waited five minutes, the sea lion would have "got bored" and gone back in the water, he said.

"I’ve been a paua diver years ago, I’ve been surfing here for 30 years, I’ve encountered them heaps of times — they’re all bluff.

Doc biodiversity ranger Jim Fyfe said at this time of year people who were not usually at the coast were having their first experience with the wildlife, and often getting it wrong.

In this case the animal would have interpreted the swings at its head as a form of playing, which could have created more problems for the body boarder, Mr Fyfe said.

Mr Fyfe advised people to be aware of their surroundings and if there was a sea lion in the water, to wait, or head along the beach.

When confronted by a sea lion the best option was to "freeze" and if something such as a surfboard or a bag was available, use it as a wall, Mr Fyfe said.

If the person decided to leave, walking was better than running. But whether walking or running, clear the area, Mr Fyfe said.

"They’re a big animal, they’ve got sharp teeth, you’re confronted with them, you get all the fight-flight emotions coming into play, and so you can do silly things.

"They’re not actually there to bite you or eat you or whatever people think they might be there to do.

"They’re just being playful and you can give all the wrong signals by just being scared . . .

"But you can also do the right thing if you just go into freeze mode," he said.