Turning fashion industry inside out 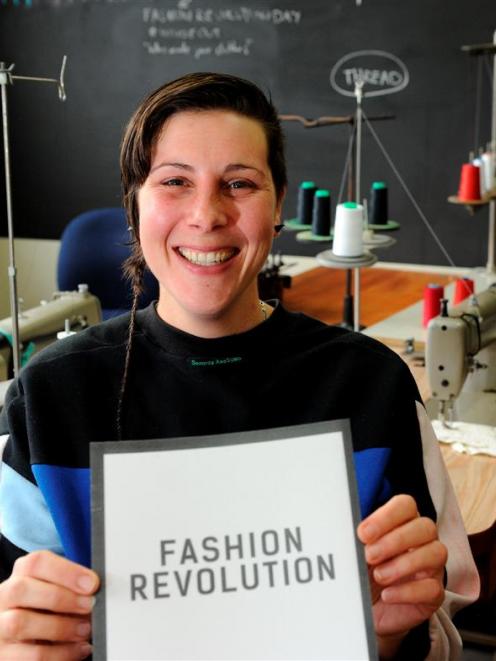 Ethical fashion designer Fiona Clements, of Dunedin, is urging residents to turn their clothes inside out today as part of a global initiative to highlight where and how garments are made, for the first anniversary of the Rana Plaza collapse in Bangladesh. Photo by Craig Baxter.
Turning clothes inside out today might help save the people who make them.

Dunedin ethical fashion designer Fiona Clements is urging all Otago residents to show the labels of their garments as part of a global initiative to mark the first anniversary of the Rana Plaza collapse in Bangladesh.

More than 1100 people were killed and about 2500 injured in the collapse of the eight-storey building, considered to be the deadliest garment factory accident in history.

Miss Clements said it highlighted the shocking work conditions of many clothing manufacturing employees, and sparked a global movement to focus attention on the importance of ethical fashion.

Today people who photograph themselves with their clothing labels showing can be part of the international effort to demand fair trade in the fashion industry by uploading images through Twitter and Instagram and tagging them #insideout or @FASH-REV.

The Fashion Revolution Day initiative has reached all corners of the globe, including Dunedin.

From 6pm to 9pm, Miss Clements will photograph anyone wearing their clothes inside out at her Senorita AweSUMO atelier at Trident House in Jetty St.

She will provide polaroids for a donation and give the money to the Rana Plaza Donors Trust Fund, and offer her workroom as a studio for those wanting to upload their own ''selfies''.

''It's about opening the fashion system to some transparency. People should be conscious of who has made their clothes and whether they have been paid a fair wage,'' Miss Clements said.

The fashion revolution was largely modelled on the fair trade movement in the food and produce industries, she said.

''That's the most prominent ethical fair trade situation we have to base it on. Consumers need to be the ones asking questions because they're the ones buying.''

Italian ethical fashion designer Orsola de Castro is among the pioneers of the fashion revolution, and an inspiration for Miss Clements.

''She designs and creates garments using factory off-cuts to reduce fashion waste. We are all guilty of buying mass-produced fashion because that's the only source we've had, but now that's starting to change.''