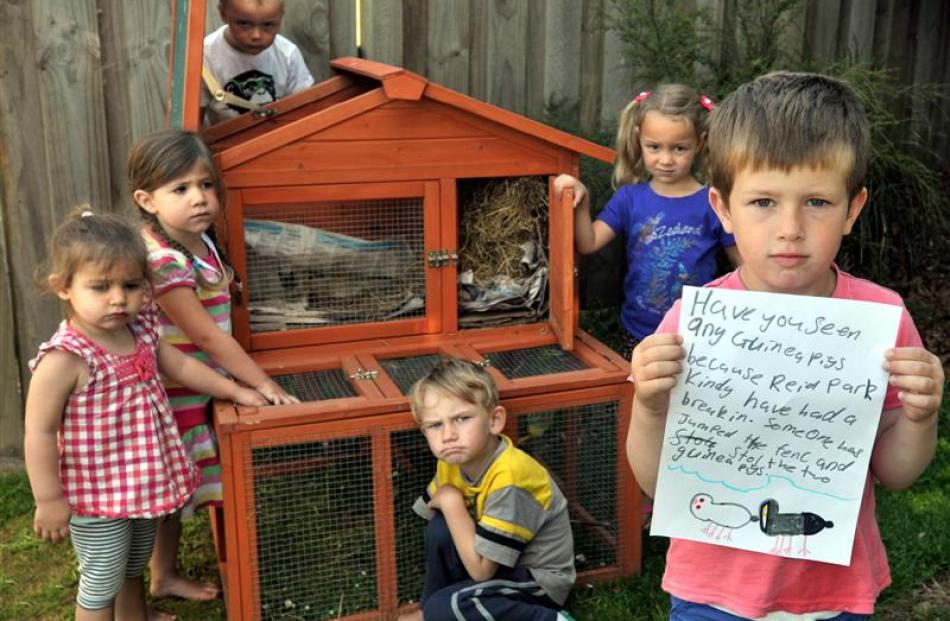 Tears have flowed at a Mosgiel kindergarten the week before Christmas after thieves stole two guinea pigs, beloved pets for five years.

Snowball and Mischief's cage at Reid Park Kindergarten, next to a fence bordering Peter Johnstone Park, was found open when staff came to work on Monday, teacher Anita Campbell said.

''It's definitely a huge loss. The children have asked, 'Can we feed the guinea pigs?' and we have to tell them they are not here.

''They are such a big part of our life here. They [the kids] are all hands-on with them. We have got big tractor tyres in the middle of the playground for them. We sit with our legs stretched out and have them in between us and cuddle them daily.''

Snowball and Mischief were last seen about 5pm on Friday, when staff left for the weekend.

Usually, a staff member would visit the kindergarten during the weekend, but no-one did this time, Mrs Campbell said.

The only way into the playground, where the guinea pigs were kept, is over the fence that connects the kindergarten to Peter Johnstone Park.

However, the gate next to the cage can be unlocked from the inside, and was found open on Monday morning.

''They [the thieves] didn't even try and hide the fact they had been in here,'' Mrs Campbell said.

''They must have known the guinea pigs were here. They could have taken anything else from the playground but have chosen not to.''

Parents of some of the 60 children who attend the kindergarten had offered to buy new guinea pigs.

She had appealed for help on social media and a letterbox drop was also planned in Mosgiel.

''Everyone's upset about it. Mosgiel is a small place. There have been a lot of kids go through here the last five years, so they all know what Snowball and Mischief look like,'' she said.

Police took fingerprints from the cage and fence on Monday.

Acting Senior Sergeant Jared Kirk, of Dunedin, said police were still investigating the theft and any help from the public on the whereabouts of the guinea pigs would be appreciated.