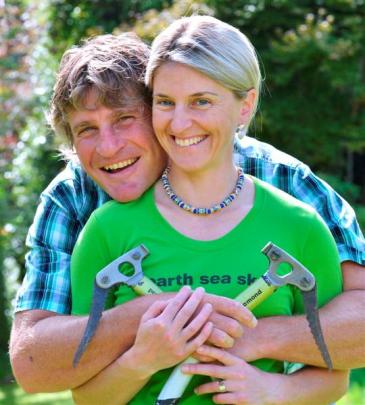 Paul and Shelley Hersey, of Warrington, are preparing to make mountaineering history in Nepal. Photo by Gerard O'Brien.

A Warrington couple are attempting to make mountaineering history on an expedition to the Himalayas.

Paul and Shelley Hersey will try to ascend a never-before scaled peak - Anidesha Chuli - also known as the White Wave.

Although the 6800m peak was 2000m lower than Everest, it was a ''logistically challenging'' climb, he said.

The expedition to Nepal would start on April 4 and the climbing party would walk 10 days to get to base camp at 5000m. It would then have 24 days to climb the peak.

''The hardest climbing will be over the last two or three days - there's a 1000m ice fall to get through, which the guys last year found a path through, but that doesn't mean there will be a path through this year.''

The ''guys last year'' failed to reach the summit.

Queenstown climber Ben Dare was rescued from the mountain last May when his climbing partner, Scott Blackford-Scheele, fell 90m, sustaining a head injury. At the time, the pair were 400m from the summit.

Mr Hersey was realistic about the dangers of the climb. Many of his friends had died climbing including Jamie Vinton-Boot, who died in a Remarkables ravine last year.

''I don't climb because I have a death wish. I climb because I love the mental and physical challenge ... when Jamie died, you go through the grief process and then you try to separate that from your own climbing - some people do that easier than others.''

Mr Hersey said he and his wife met climbing and honeymooned in the Himalayas in India.

Mrs Hersey said she was on the same ''wavelength'' as her husband when they climbed, ''in terms of not taking too many risks and wanting to get back and enjoy the good life''.

Mr Hersey said the cost of the expedition, excluding gear, was between $30,000 and $40,000. They received a North Face adventure grant and a Mount Everest Foundation grant.