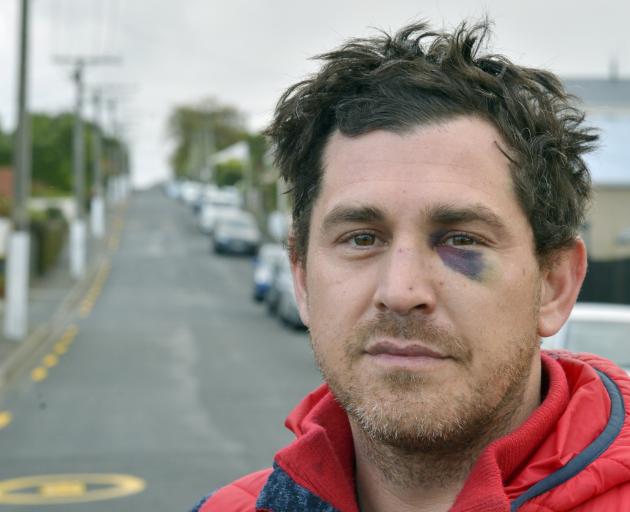 Jared Hunter Mason is still recovering from the injuries he sustained in the incident.
A Dunedin man whose face was damaged during a road rage incident in Mornington says the police investigation is leaving him frustrated.

Earlier this month, Jared Hunter Mason was returning home from the supermarket when he was allegedly assaulted by two men during a road-rage incident in Galloway St.

His nose and cheekbone were broken, but the police investigation into the matter is causing him more pain.

Photos of the car and the alleged attackers had been given to police and another motorist had corroborated his statement.

Despite police identifying the people and visiting at least one of them at home, no arrests had been made, which was extremely frustrating, he said.

He had also seen one of the alleged attackers near his home.

''We asked the detective why no-one has been charged and he said they'll just be back out on bail the next day.

''When we said that doesn't sound fair, he said, 'Well that's life', which we didn't feel was appropriate.''

A police spokeswoman said there may have been a misunderstanding between the officer and Mr Hunter Mason.

The officer in change was explaining that, when someone who had a minimal criminal history was arrested, there might not be the ability to oppose their bail once they had been charged, the spokeswoman said.

A person could still have strict bail conditions imposed on them in that situation, she said.

Police had spoken to one of the people believed to be involved in the incident and were continuing to investigate.

Mr Hunter Mason said there was no misunderstanding and he would consider making an official complaint about the matter.

He was still recovering from the injuries but had been able to return to work last week.