A civic vigil to be held in Dunedin later this week is a chance for residents to "put their arms around each other'', Mayor Dave Cull says. 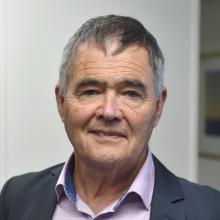 Dave Cull
The Dunedin City Council this afternoon confirmed a civic vigil, organised by the council and Amnesty Otago, would be held in the Octagon on Thursday, starting at 7pm.

Mr Cull said the city was "grieving and in shock'', and the vigil would be "an important way to support our Muslim community and the broader community''.

"We need an opportunity for our residents to put their arms around each other at this tragic time.''

He urged people to join the vigil to show "solidarity and support, and to demonstrate the resilience and love of the Dunedin community''.

The vigil would build on an event already being organised by the Otago University Amnesty International Group, which had been planned for Thursday.

It would now instead become the civic vigil, co-ordinated by the council.

The DCC and Amnesty had worked closely with the Muslim community and other organisations, including the Police, the Dunedin Multi-Ethnic Council, the Dunedin Interfaith Council and the Otago University Students' Association, in planning the event.

Mr Cull said the response to Friday's "appalling and cowardly'' terrorist attack in Christchurch had been emotional.

"It's been heart-wrenching to see Dunedin residents express their support in a range of ways over the weekend, from gatherings to small acts of kindness. I'm incredibly proud of our community.''

The council had wanted to organise a vigil earlier, but with members of Dunedin's Muslim community in Christchurch at the moment, it needed to wait until Thursday, he said.

The vigil would begin with a mana whenua welcome and include speeches by Mr Cull and representatives of the Muslim community, as well as prayers from faith groups across the city.

There would be a strong police presence at the event, Mr Cull said.

Meanwhile, a community vigil was also planned in Mosgiel tonight.

The event, at 7pm in Memorial Park beside the public library, is being organised by church leaders from the Taieri Ministers' Association.

Those attending would have the opportunity to place flowers or a card, while flower and a banner reading "They Are Us", and Tatou Tatou E (All of Us) in Maori, would adorn a gate outside the children's playground.

The location was close to where many Syrian refugees live, organisers said.