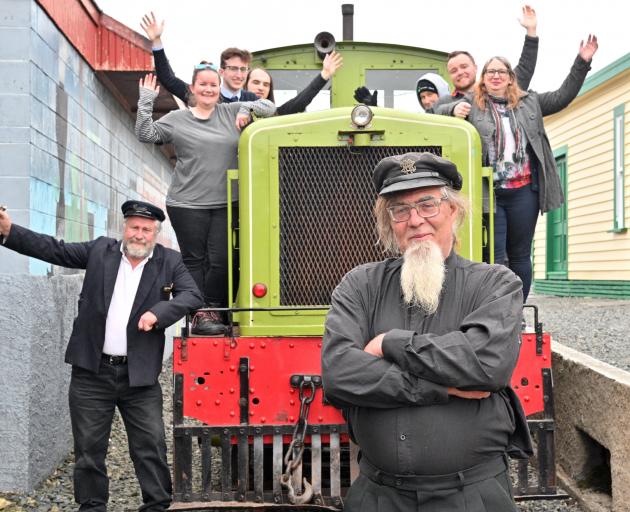 The Ocean Beach Railway is reopening this weekend. Driver Ted Leach (foreground) with volunteer members of the Otago Railway and Locomotive Society (clockwise from left) guard Paul Bedwell, Courtney Kilner, James Eunson, Karl Leach, Doug Boult, Philip Riley and Angeline Leach on shunting locomotive Tr81, which was built in 1939. PHOTO: LINDA ROBERTSON
The historic Ocean Beach Railway in Dunedin is back on track, and will reopen to the public this weekend after a four-year closure.

Heritage trains will run from this Friday until Monday and will then be in operation every Sunday until Queen’s Birthday.

"Revitalised" and "determined" members of the Ocean Beach Railway worked to reopen after a setback in 2017 when more than $50,000 worth of equipment was stolen from the St Kilda sheds.

Restoration work was put on hold during the saga and train excursions were limited because of delays in maintaining the track.

"The current membership who volunteer in operational roles, such as drivers, firemen, guards and stationmasters, are all very excited in the reopening of the railway and cannot wait for the public to enjoy heritage train rides again."

One of the goals was to increase community support for the railway.

This weekend, trains would be available from 11am to 4pm and the fare would be a gold coin donation.

"If demand is there, the heritage trains may also operate on the Saturdays, too", Mr Riley said.

"The current membership will be making some further decisions over the next 12 months on what priorities are required to get the railway ticking along to ensure it hits targets and operational goals."

Governed by the Otago Railway and Locomotive Society, the Ocean Beach Railway was established in 1961.