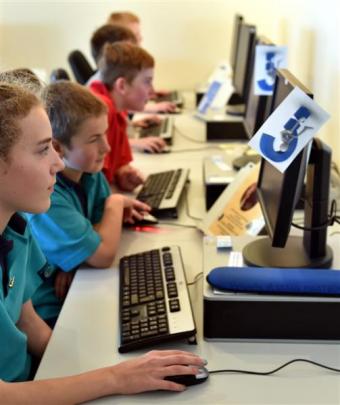 A group of Dunedin school pupils have been given a head start into the all-important world of technology through the Mosgiel Code Club.

The club, which ran after school hours every Thursday, was initiated by club leader Bernadette Hay and taught children the skills of coding and programming.

The 90-minute sessions were attended by 15 children between 9 and 12 years of age, Mrs Hay said.

''The feedback from parents is the kids are really enjoying it.''

Code Club Mosgiel is part of Code Club World and was started by Mrs Hay after she saw a club operating in Northeast Valley.

It was run in conjunction with Dunedin Public Libraries and Otago Polytechnic and was held in the polytechnic's Mosgiel campus.

The course had six modules and each one took a school term to complete, Mrs Hay said.

The second two modules taught children how to program for websites using HTML and the final two modules were centred on programming system Python.

The classes were run by volunteers with knowledge or expertise in programming software, Mrs Hay said.

There were four volunteers at present and the club was looking for more.