Waitati on way to generating own power 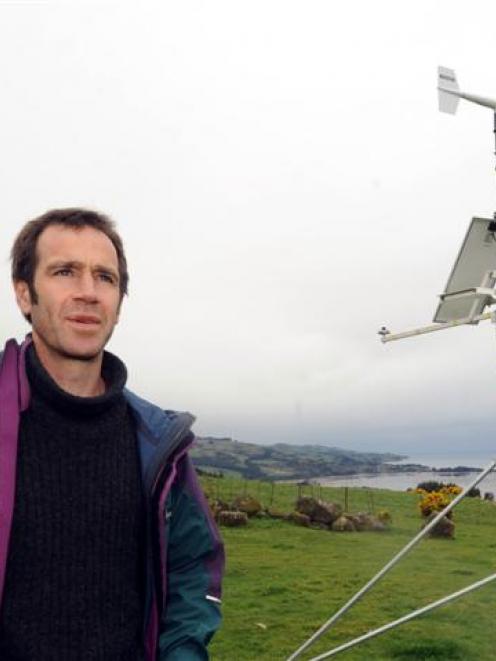 Waitati Energy Project co-ordinator Scott Willis stands on Double Hill beside one of two automatic weather stations set up by University of Otago students. Photo by Peter McIntosh.
The Blueskin Bay community north of Dunedin is well on the way to owning and managing its own renewable source of power generation.

The next 12 months will be crucial for the community's wind-turbine project, as recently confirmed funding from the Hikurangi Foundation means local people have a year to "get moving" on their dream.

The funding means Scott Willis, who co-ordinates the Waitati Energy Project (WEP), can work full-time over the next 12 months on "key ingredients" of a site, legal documents and funding.

In February 2008, the Hikurangi Foundation was set up by the Todd and Tindall Foundations to fund climate action, with each contributing $500,000 for two years.

Mr Willis said there was no template for community-owned power generation in New Zealand, although it had been achieved overseas.

"We don't have the legislation, policy or cultural habit to follow. But we believe in the idea that if we don't do something, no-one else will," he said.

The push for a wind turbine to power Waitati began in 2006 with a community workshop and has continued through various meetings since.

Mr Willis said the WEP recently applied to the Energy Efficiency and Conservation Authority for funding for a feasibility study.

The University of Otago has also been helping the Waitati community.

They set up automatic weather stations at two sites on hills on either side of Waitati and took readings over a six-week period, then reported to the Waitati community last week.

Dr Cullen said the weather stations were 2m high but wind turbines could be anywhere between 10m and 30m tall, so the results had to be viewed with caution.

The wind speeds were lower than a commercial wind site required but there was "certainly potential" for wind generation in the area, he said.

Masters student Alice Bowden had taken on the project and would take readings from a 10m mast over a 12-month period.