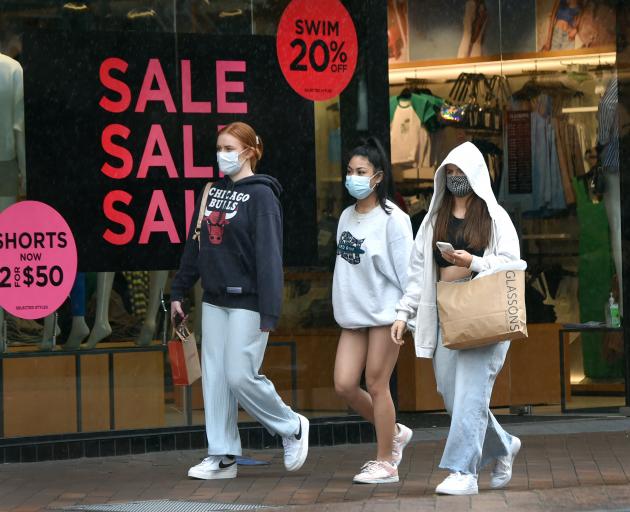 The totals were above levels seen in the past two years.

A Worldline spokesman said nationally, a total of $696.5million was spent over the same time frame — up 7% on the previous year.

The figures primarily reflect transactions undertaken within stores, but also include some e-commerce transactions.

"This New Year’s Eve spend included $16million processed through liquor retailing merchants (excluding liquor spending through supermarkets), which was up 13% on 2020.

"Overall, spending at liquor merchants on New Year’s Eve 2021 was higher than 2020 across all Worldline NZ-defined regions, except Gisborne and West Coast."

Boxing Day sales in the South were down on previous years.

The figures showed a total of $4.9million was spent in Otago and $1.7million in Southland at core retail merchants.

This was 6% down in Otago and 1% down in Southland, compared with the previous year.

However, spending at core retail merchants nationwide in the critical pre-Christmas period of 2021 was up 6.9% on 2020.

"The final week of spending for 2021 provided a strong end to a year that was notable for lockdowns and travel restrictions across borders around New Zealand’s largest city of Auckland.

"Across the nation, annual spending growth was highest in Taranaki (up 17%) and lowest in Gisborne (down 3%)."

Smiths City managing director Tony Allison, of Dunedin, said he had enjoyed seeing the increase in spending across the southern regions.

He believed the increase was mainly related to the way Boxing Day sales were run now.

"Instead of Boxing Day specials being held on Boxing Day, they’re now being stretched out over one to two weeks.

"Particularly with big-ticket purchases, there’s a lot of consideration required, and I think people shop around more.

"Now that they’ve got two weeks, they take their time.

"That’s why Boxing Day sales were well down for us [at Smiths City], and the following weeks were well up."

Inflation had also gone up, causing the prices to go up marginally, but there had also been an increase in spending because the specials on offer this year were "pretty strong", Mr Allison said.