Almost 150 motorcycle riders gather for the start of the ride at Careys Bay yesterday. PHOTO: PETER MCINTOSH
Neither thunderstorms nor hail could halt nearly 150 philanthropic motorcyclists from delivering Christmas cheer in Dunedin yesterday.

The riders assembled in the central city in the afternoon as part of Bronz Otago’s 36th toy run.

The bikers met at the Carey’s Bay Hotel, then rode to the dental school and into the Octagon.

There they donated gifts to the Balmacewen Lions, which distributes them to charities, and made donations to the Muscular Dystrophy Association of New Zealand and the Otago Rescue Helicopter Trust. 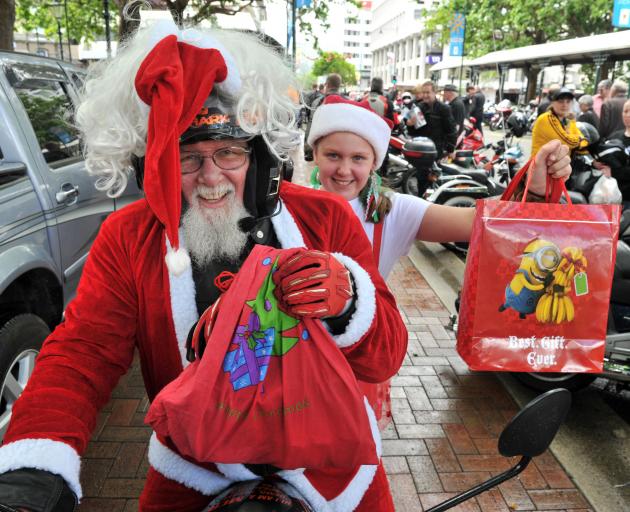 Ronnie Zarco and his helper Lily Havard (10) deliver gifts to the Octagon on his e-motorbike yesterday. PHOTO: JONO EDWARDS
Shortly before the riders reached the Octagon, torrential rain and heavy hail started, followed by thunderstorms.

The event was a "great cause" and got "bigger and better each year", he said.

The group would not yet know the number of presents donated, but it was "hundreds and hundreds", he said.

The ride from Port Chalmers to the Octagon was quicker than in past years, he said.

"We wanted to get out of the rain."