We're not such a satisfied lot 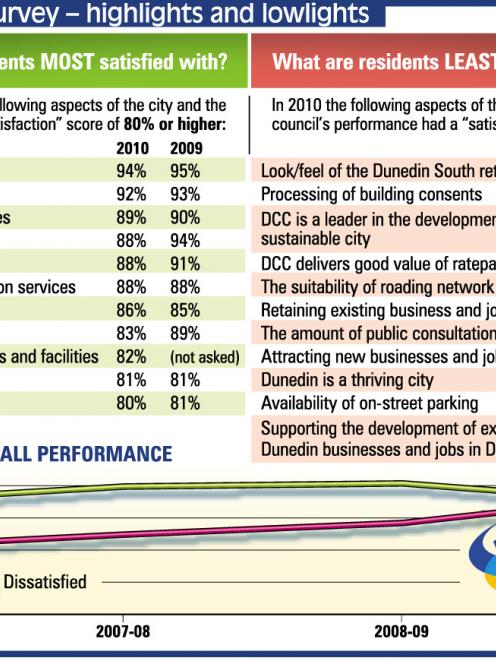 More Dunedin residents are dissatisfied than satisfied with the performance of their council for the first time since surveys began in 1994.

The 2010 residents' opinion survey, released yesterday, showed 35% were satisfied with the overall performance of the Dunedin City Council, while 38% were dissatisfied.

The company which carried out the survey, Research First, of Christchurch, reported the figures needed to be interpreted in a context of a more "pessimistic city populace overall" and a national decline in satisfaction.

The outcome of the research shows downward dips in figures across a variety of areas.

Mayor Peter Chin and chief executive Jim Harland yesterday said the survey was one of "perception", a snapshot of the city at one time, which could go another way depending on factors outside the city's control.

Mr Chin took a shot at people who believed Dunedin was no longer a "fun city", with satisfaction on that point down 12% to 38%.

"It does concern me the number of people who knock the city," Mr Chin said.

Events on in the city, or about to start, included the science festival, brass band contest, and film and chocolate festivals.

"The city is buzzing," he said.

Mr Chin said mistakes had been made in areas such as parking, and decisions made, such as the stadium, with which many disagreed.

Some of the city's favourite facilities - its Botanic Garden, public libraries, museum, and rubbish collection service - shone through, with percentage figures in the high 80s or low 90s.

One of the biggest falls in satisfaction came in respondents' perception of the "look and feel" of the city overall, down 16% to 63%.

The survey was sent to 4500 randomly selected residents, and 1077 responses were received.

An online survey was available for anybody who wanted to fill it in, which 176 people did.

Carl Davidson, of Research First, said residents continued to be "very highly satisfied" with many of the things the council provided, but they also continued to be dissatisfied with things that displeased them in the past.

One unusual finding was satisfaction with contact with community board members, and the mayor and councillors, which was up by 12% and 5% respectively.

Asked what the city could do to improve the situation, Mr Harland said there was low satisfaction with the extent of consultation, but he produced a list of 39 issues that had been consulted on recently, and noted when the council did try to consult, as in the survey, only one in four people bothered to respond.