Wheels in motion: The 12 transport projects that will change Dunedin

More than $100 million could be spent on 12 major projects over the next decade to significantly alter the shape of Dunedin’s highways and byways. Photo: ODT
The wheels are turning on a transport package designed to make it easier for traffic to get around Dunedin while the city’s new hospital is built. Grant Miller looks into what is proposed.

More than $100 million could be spent on 12 major projects over the next decade to significantly alter the shape of  Dunedin’s highways and byways and the ways people will get around the city.

Planning for how the transport network will work around the location of the new Dunedin Hospital has been under way since 2018.

Bubbling away in the background are concerns that two-way traffic around the hospital would be slow, assuming the one-way system is changed, and traffic would also be at a crawl on what could be a one-way George St.

Planners and civil engineers have been turning their minds to how they can ease congestion and reduce reliance on private motor vehicles.

The main things the projects aim to achieve are improving public transport, creating more efficient alternative routes and providing clear communication to make all things transport-related more accessible and safe while, and after, the new hospital is built.

Both the Dunedin City Council (DCC) and Otago Regional Council (ORC) will include their share of the projects in their draft 2021-2031 draft 10-year plans, to be debated and approved this year.

The ORC has two business cases proposed, to demonstrate the case for investment in improved public transport services.

Thousands of people have provided ideas and thoughts about how they believe transport options in central Dunedin should be adjusted, and more technical studies and planning work are being done.

Here is what we know from the various documents and information and commentary publicly available about the projects, from the most to least expensive.

Why? To improve public transport as an alternative to private vehicle use.

Port Chalmers and Portobello could have more frequent services at peak times and a direct service may be offered from Mosgiel into central Dunedin. A new service could start from Green Island via South Dunedin. 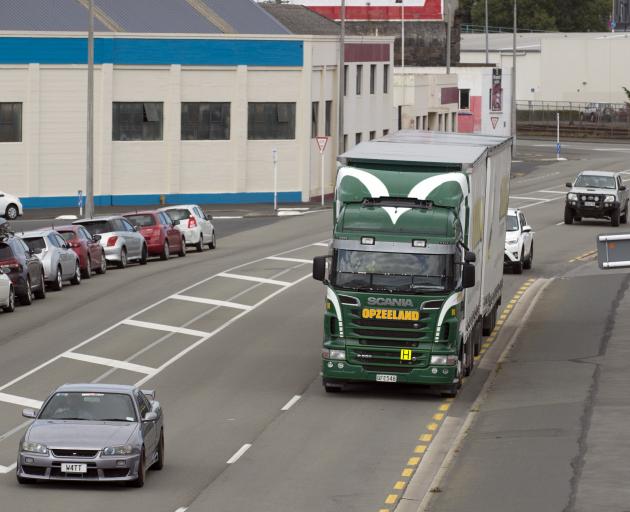 The proposed harbour arterial route would run along a number of streets including Thomas Burns St (pictured). Photo: Gerard O'Brien

The harbour arterial route would run along Wharf St and Thomas Burns St to provide an alternative route bypassing the city centre, avoiding the new hospital during and after construction.

The arterial route would begin at the Andersons Bay Rd intersection, turn on to Strathallan St, Wharf St, Thomas Burns St, to the overbridge on to Anzac Ave, then traffic could either travel back on to the state highway heading north via Frederick St, or turn towards the port at Port Chalmers.

The main east-west route on St Andrew St would be moved to Frederick St. Includes changes in Strathallan St, Wharf St, Ward St and at their intersections with side streets.

Possibly two-waying the State Highway 1 one-way carriageways around the construction area of the new Dunedin Hospital.

Options being considered include changing to a two-way system and making Cumberland St outside the new hospital a local road.

The arterial route would remain on the existing southbound route, passing behind the new hospital.

A solid median strip would separate the two lanes and there would be no cycleway and minimal parking along this road.

The existing northbound route would become a local road. The speed limit of this road, which will pass in front of the new hospital, is reduced.

The area would be made more attractive through improvements such as tree planting, landscaping and seating. The main east-west through route in St Andrew St could be relocated to Frederick St. A decision on what to do is to be made in March.

To cater for the 65% of trips into the city that are made by people coming from the south/west.

Parking areas, where people can leave their car and catch a city-bound express bus service.

The purpose is to provide another transport option, reducing traffic demand in the central city. No more information about this project has been shared.

Implementation of a plan to improve parking, including a review of pricing, location and availability of parks.

Motorists may make use of technology to help them find available parks and the city council could bring in electronic signboards.

Paid parking areas in the central city could be expanded and new meters added.

Fill in gaps in the central city cycle network by creating cycleways in St Andrew St, Bank/George St and Albany St (providing a direct link from the harbour shared path to the city centre via the university).

Extra barnes dances in the city centre to improve access to the new Dunedin Hospital sites.

A super stop can be thought of as a deluxe bus stop or a stop with a higher level of service than a general bus stop.

Five super stops — at North Dunedin, the tertiary precinct, Mosgiel, Green Island and South Dunedin — could be constructed, one a year, from 2023-24.

Bus hub changes could include additional seating and shelter and amenity upgrades such as lighting. 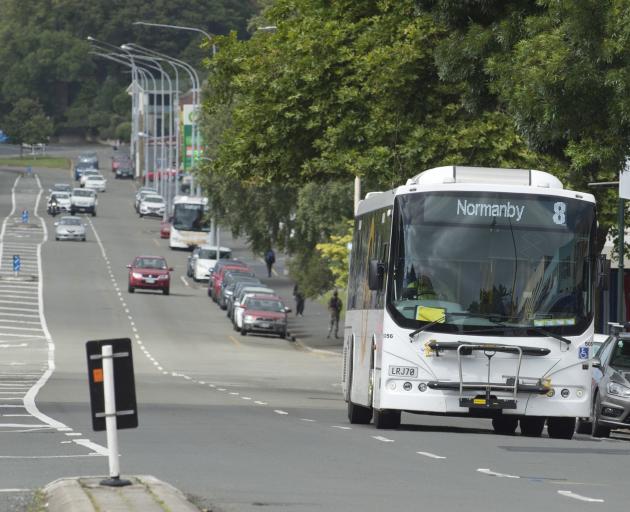 Bus lane from South Rd to Manse St, then to Moray Pl to promote more efficient movement of buses along Princes St. Improvements would also include pedestrian crossings along Princes St connecting each side of the road and providing better access to bus stops. Junctions with side roads would also be improved to support pedestrians walking into the city from the south.

Relocating SH88 from St Andrew St to Frederick St. St Andrew to be downgraded and will have pedestrian focus. Frederick St will meet state highway requirements.

Safety improvements to address the ongoing risk at the intersection of Great King St and Pine Hill Rd. Solutions could include a truck ramp for vehicles with brake failure, traffic lights or an overpass or underpass, it was reported in October 2019. 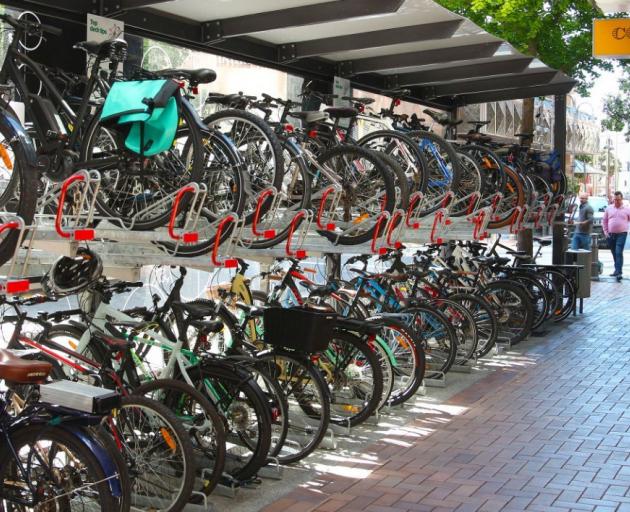 A collection of bicycles in Wellington provides an indication of the sort of facility that could be introduced at three Dunedin sites. Photo: Supplied

Places where cyclists can lock their bikes in sheltered lockers and other facilities, such as repair and charging services, in North Dunedin, Central City and South Dunedin/Oval.

Just goes to show DCC councillors and staff will do anything to pursue their anti-car, pro-bus and bike plans. No amount of wasted money is enough.

All this on the thin pretext that build a new building (or two) means Dunedin's entire traffic flow must be disrupted forever. Patent rubbish and lies. Building are erected in a few years, stupidity lasts for a lot longer.

Only one of these plans is aimed at improving traffic flow. 4 projects to benefit the non existent bike community. 4 projects to "persuade" people to ride a slow, clanky, inconvenient bus.
We all know where these Green councillors' focus is. It isn't fixing 100-year-old sewers and water supply. It is solely about getting aged pensioners from Maori Hill to ride a bike to buy their groceries.
Overall, a stupid set of policies set up by a stupid group of policymakers and planners.

Roll on the next election and then the clean-out of councillors and planners can begin.

Cars have been king for too long, Keith. They are a terrible way to get an urban population around a city. Dead space parked up 90% of the time, hugely inefficient use of space, energy and materials - using a ton of metal to shift one person. Dangerous for any other non motorized traffic, lethal for hundreds, if not thousands of animals everyday. Polluting, noisy and expensive too. A shift to focus on other traffic types is a good one in my eyes. I would suggest more people in Dunedin don't drive than do : the young, the old, the sick and the poor, not just 'crazy' greenies. About time we planned for them too.

"Dead space parked up 90% of the time", that's cars. That's similar to most of the things we use, so should we get rid of them too? Cups and plates, saucepans, stoves - clear them out, force people to eat and drink out. That will be convenient for "the young, the old, the sick and the poor"!
Gumboots and jandals, pick one discard the other. Even planes, boats, scooters, bicycles motorised or pedal-powered, helicopters, are used when there is a use for them, "parked up" the rest of the time.
Cars are affordable compared with public transport - unless there is only one adult needing to be transported, and they live and work (school, uni, childcare) in places close enough to bus routes, with starting and finishing times that fit with public transport timetables.
Cars provide sick - not all sick and disabled people are bedridden - and elderly - yes, old people drive! - with means to get around and participate in society.
By all means use other ways of getting around if that is what suits you, and think a bit more deeply before making pronouncements on the decisions other people should make.

Building the hospital in a different location would have solved many of these problems, because then they would not have even been created...

The only issue with the Pine Hill intersection is one of enforcement of the existing rules. People are either NOT stopping at the compulsary stop at the bottom, or they are coming down Pine Hill Rd too fast. This is basic road code stuff, not poor design. A couple of permanent speed cameras will fix that. As for the trucks crashing, this is as much about the way trucking companies work their drivers and perform maintenance. There is no way that should cost $3m!

They really don't listen, do they. More money wasted without solving any problems, just creating more. Time we started getting cyclists to pay for all the useless infrastructure we are having to fund. I thought we had 'user pays' for a lot of things, why not cycle paths?

"...getting cyclists to pay..."? How do you think the local roads are funded Dave? The DCC spends $50M+ of our rates a year on roads. If you want users pays, then cars would need to pay thousands more to cover their share. Cars are subsidized by rate and tax payers who don't drive. Besides that, most adult cyclists are also motorists... or do you also want to charge children?

Number 11: $3m for Pine Hill improvements (and underpass or a flyover) - what a joke considering the bike shelters are $2.5m.
This council is a joke who continually push joke ideas.

"Work would cover SH1 from Pine Hill Rd to Andersons Bay Rd and include making the current one-way system two, two-way roads."
Time travel back to what existed before the one-ways were created. Job creation for town planners and roading engineers. Every few years change back then re-change, it's such a good use of taxes & levies extracted from us whether we like it or not.