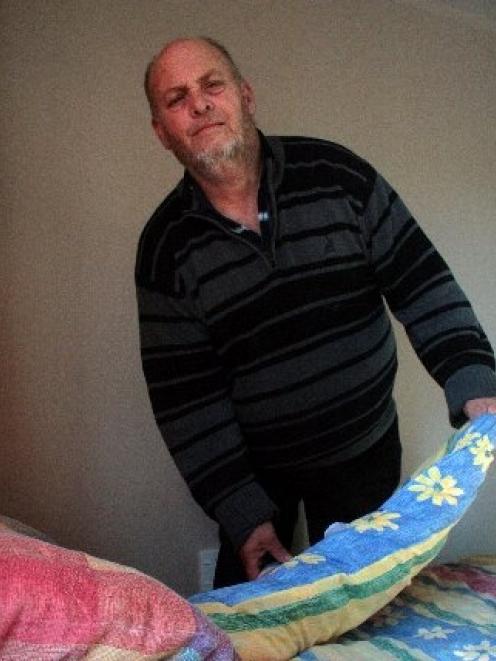 Night Shelter Dunedin co-manager Ian McAuliffe tidies up after another busy night this week. Photo by Dan Hutchinson.
More than 50 women have stayed at Night Shelter Dunedin since it stopped its men-only policy nine months ago, including someone in the last month of pregnancy.

Ian McAuliffe, one of two managers at the shelter, said they had helped several pregnant, homeless women, women on their own and others who had children with them.

The Night Shelter changed from a men-only facility on August 1 last year and had taken in more than 50 ''different women for different reasons'' since then, Mr McAuliffe said. It worked closely with

Women's Refuge which was normally able to take women and children in.

The shelter had been ''extremely busy'' over the last two weeks with more than 60 guests in that time.

One visitor was a man who was flooded out of his regular home - a cave near Outram - during heavy rain over Easter.

Mr McAuliffe estimated that 80%-85% of people coming to the door were under the influence of legal or illegal drugs, or alcohol.

''I am pleased to see the legal highs stopping this week because we have had a lot of problems with that.

''I will be pleased to see the end of that because a lot of our frequent flyers - they get their benefit on a Wednesday or a Thursday and they are broke by Friday, all spent on these legal highs.''

There were also more young people coming to the shelter suffering from the ''age-old problem'' of not having suitable ID, such as a birth certificate, to get a Work and Income benefit.

''I had another young lad who came in on the weekend. He turned 18 two weeks ago... his father had kicked him out of home and, of course, [he had] no idea of how to get on a benefit or anything like that.''

Such cases took longer to sort out, required a lot of work and the shelter often had to break its own three-day maximum stay rule.

Mr McAuliffe said the shelter worked with a lot of other agencies to sort out problems for people but some were quite happy with their lifestyle, only stayed for a night every month or so and did not want to be referred to another agency.

One of their regular guests had been coming in over the course of 30 years.