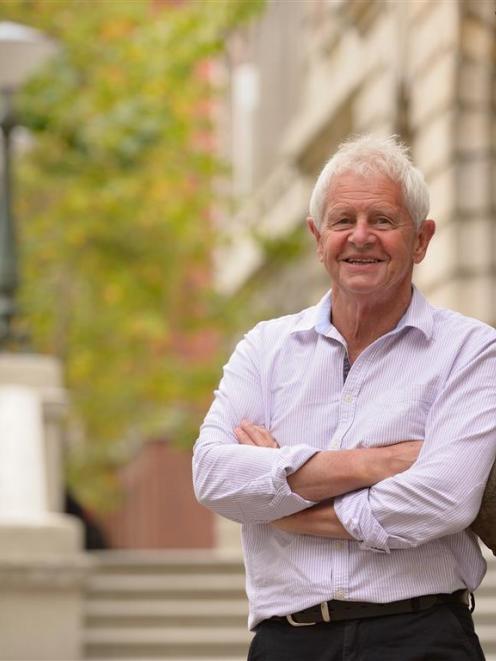 David Gerrard stands outside the Lindo Ferguson building yesterday, where he trained while at the Otago Medical School. Photo by Gerard O'Brien.
After almost 50 years studying and working at the University of Otago, professor of medicine David Gerrard has retired.

The 70-year-old Commonwealth Games swimming gold medallist and his wife, Barbara, are moving to Auckland to be close to their three sons, Brett, Daniel and Tim, and their five grandchildren.

But he plans to continue as chairman of the World Anti Doping Agency's therapeutic use exemption committee, in his roles on the International Swimming Federation's sports medicine committee and as a doping adviser for World Rugby.

Prof Gerrard, who was born in Auckland and attended Auckland Grammar, has worked at the university in various roles since 1981.

By 2007, he had become the associate dean and associate professor of the School of Medicine, before being promoted to professor two years ago.

"It will be very sad to leave Dunedin,'' Prof Gerard said.

"It's been a wonderful city that's endeared itself to us.

"But I've always thought you should leave your best game on the paddock ... Leave at quarter to, not quarter past. I think I've had a wonderful innings at the university.''

While Prof Gerrard has retired from the university, he expects to be in the city for at least a month or two while their house sells.

Prof Gerrard moved to Dunedin in 1966, after winning gold in the 200m butterfly at the British Empire and Commonwealth Games.

He met his Waimate-born wife in the city while he was studying physiotherapy.

The pair married in 1968 and briefly moved to Auckland.

They returned to Dunedin in 1971 so Prof Gerrard could attend medical school.

After working briefly as a house surgeon at Dunedin Hospital, he spent a few years as a registrar in Tasmania and Dunedin between 1978 and 1981.

He was then physician in charge of Student Health Services at the university for 12 years.

For the past 15 years, he has worked in various roles in the medical school, including as a teacher and researcher.