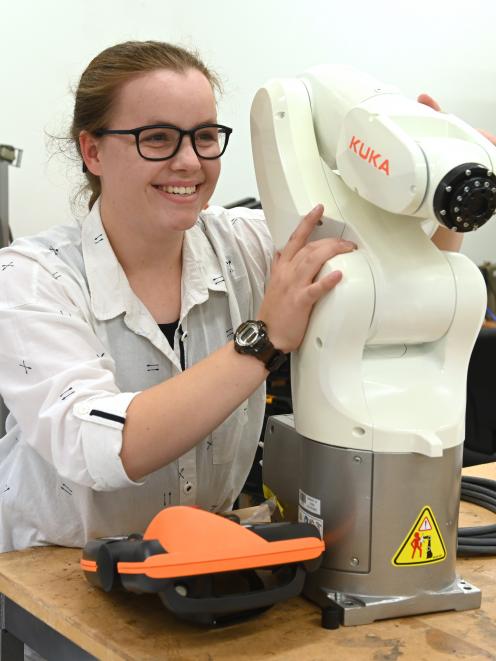 Aspiring electrical engineer Hanri de Bruin poses with an automated arm, similar to the one she will be working on to help Blake Forbes-Gentle. PHOTO: LINDA ROBERTSON
An electrical engineering student is undertaking a once-in-a-lifetime project at Otago Polytechnic, as she prepares to programme a $15,000 robotic arm for a young man with cerebral palsy.

Hanri de Bruin (21) is working on simulation software and then applying it to a first version of the arm, which will arrive in coming months from ABB Robotics and will weigh about 10kg.

With a variety of grips, and the capability to add vision, sound and sensory technology, the arm will hopefully prove invaluable for 20-year-old Upper Hutt student Blake Forbes-Gentle.

School of Engineering Associate Prof Matt King said Ms de Bruin would apply the work she had done on the first arm - which would remain at the polytechnic - to a second arm, which would be funded by the family.

Mr Forbes-Gentle, who hopes to study music therapy when he leaves school, has very limited use of his hands.

His family approached Otago Polytechnic's engineering department after hearing of the work it was doing.

"By mounting one of these collaborative robot arms on to his wheelchair and custom programming it to meet his specific needs, he will be able to manage a variety of tasks, including feeding himself, using his iPad, and maybe even write," Mr King said.

Ms de Bruin, who specialises in mechatronics, was delighted to be able to work on the project, saying she was in the right place at the right time.

"It's got all of the state-of-the-art technology," she said.

The arm was "really versatile" - and while to begin with Ms de Bruin would simply be working with the different grips, she anticipated having to integrate vision technology, which would be particularly helpful for instance when it came to eating meals.

"We are looking at permanently mounting it on to his wheelchair."

The polytechnic had received videos from the family of Mr Forbes-Gentle's movements, so they could see his limitations.

Examples of other innovative work the polytechnic's engineering department was doing, which she hoped would continue under the Government's proposed polytechnic merger, was a project involving constructing a plane from a Van's RV 12 aeroplane kit - work that began in 2017.

Prof King said funding for all of the polytechnic's existing projects had already been approved.