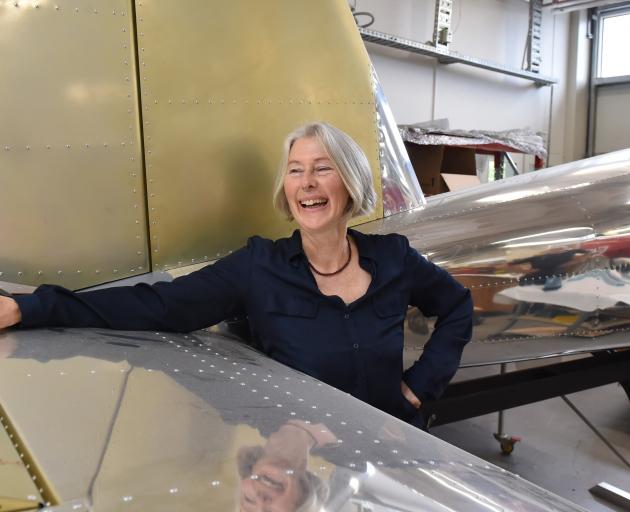 Otago Polytechnic engineering student Charlotte Flaherty with the polytech's Van RV-12 kitset plane. Photo: Gregor Richardson
Never in her wildest dreams did Charlotte Flaherty imagine she would retrain, at the age of 44, as a mechanical engineer.

But that is what happened, when the former Otago Daily Times journalist, now 54, decided to go to Otago Polytechnic to change careers.

Mrs Flaherty's interest in engineering sprang from her time working at the Dunedin City Council. She joined the council transport department and worked on its cycle skills programme after leaving the newspaper.

''I just saw what the engineers were doing and how they applied logic and reason to issues, and I really liked that. I found it really appealing as a way of thinking,'' she said.

''[My work] offered me the chance to do some papers for a diploma while I was working, so I did part-time study.

''I did it for I think two years, but it was so tough working full-time and with children who were quite young and studying. The more I thought about it, the more I wanted to be a full-time engineer.''

She enjoyed the problem-solving components of the course, and after taking papers towards a diploma in civil engineering, beginning in 2009, she progressed on to a degree in engineering technology, specialising in mechanical engineering, which she took full-time.

She was able to take Summer School papers at the polytechnic before she began her degree to get her maths up to scratch.

''Full-time study is quite tough when you've been in work for years.''

She was based at the Dunedin campus, and found polytechnic a ''really diverse'' environment, as there was a huge range of nationalities and ages among the student population.

''I never felt out of place. I immediately felt that I fitted in and was good to go.''

She was not the only mature student taking the degree - a large number of people in their mid-20s or older were on the course.

''Within the engineering degree I'd say about a quarter of the people are older.''

Now in her final year of study, she was working on collecting energy from flowing water, using a piece of electric material.

She had also worked on the polytechnic's Van RV-12 kitset plane - a work in progress which began in 2017 - working on the project's health and safety plan.

Mrs Flaherty did a placement at global firm Stantec this summer, and when she completes the degree, the third-year engineering student has been offered a place at the company as a graduate engineer.

''I can't tell you how exciting it is. It's a massive thing making a really big change-of-life decision. I feel like doing cartwheels.''

Polytechnic chief executive Phil Ker said the average age of students at the polytechnic was 27-28. In the Capable NZ course, there were between 350 and 400 full-time-equivalent students, all of whom were over 40.

''We are strong in the whole adult-learning-in-the-workplace [area] ... It's a growing area for us.''

Otago Polytechnic had built a ''strong identity'' as an institution that gave students ''really good work opportunities'', and had a distinct culture, Mrs Flaherty said.

''It produces students who can work and who know how to work.''

Engineering lecturer Associate Prof Matt King said the polytech was ''always looking for what our community needs'' and trying to meet regional needs.

In the case of the engineering department that included some of the requirements of the new Dunedin Hospital build, and a medical technician programme was being explored for next year training people to calibrate and repair medical equipment.