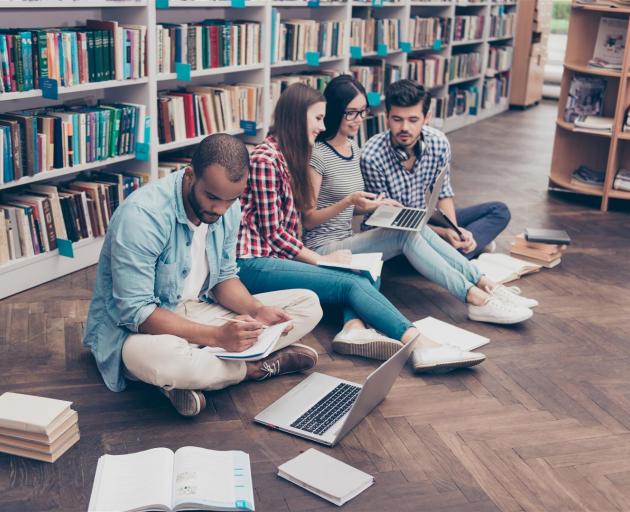 Students learn in and from many different contexts. Photo: Getty Images
Like the Ministry of Education, Prof Richard Mitchell believes New Zealand’s vocational education and training (VET) system is long overdue for change.

In the first of two articles, he outlines why he believes that the current ‘‘Fordist’’ education system is inherently inefficient and unresponsive.

The Ministry of Education has provided us with a once-in-a-lifetime chance to transform vocational learning into a highly-responsive, future-focused learning system that recognises the diversity of learning needs for an increasingly complex world. Sadly, it appears the Government is doubling-down on an archaic Fordist model.

In 1909, Henry Ford famously told his sales staff that Model-T customers could have ''any colour so long as it is black''. So began what is now known as the Fordist mode of production.

Where previously highly skilled coach-builders hand-built individual cars, Ford's factories reconceived the process into a series of component systems (chassis, drive train, engine, body, trim, paint, etc). Ford's system was highly organised and sequential and efficiencies were gained by standardising the component systems, the parts and the tasks done by each factory worker.

Fordist production soon moved beyond car factories to everything from fashion to food - and even to education.

Post-war, prosperity and successive boosterist governments in the 1960s, '70s and '80s, required education to be scaled up quickly to supply the labour-force of booming economies.

So, governments invested in a Fordist system that moved from on-the-job learning to formalised, factory-style education.

The result was an affordable VET system that delivered large numbers of graduates but, like your Model-T, ''you could have any colour of qualification as long as it was black''.

Decades ago, car manufacturers began to dismantle this model and now consumers can choose from several models, with dozens of colour combinations and optional extras. Car factories now produce thousands of customised cars per day.

On the contrary, over the same period of time, successive governments around the world have reduced the number of VET options available and continued or even strengthened an outmoded Fordist model of delivery.

This has reduced providers' ability to deliver timely, efficient and effective VET for increasingly diverse economies.

The modern car industry is both efficient and responsive to customer needs and, as technology develops exponentially, it will become even more so. The Fordist model has evolved beyond recognition to become a system of mass-customisation.

''But education is not like a car factory and cars are not students'', I hear you say. And you would be right. In fact, a Fordist system has never been the best system for delivering education, it was just the simplest for governments to work with when they needed to scale VET and no government has questioned it since.

Sadly, the proposed reform seems to be focused on strengthening the Fordist VET model, when an opportunity exists to completely redevelop the system to be more responsive.

So, why do we need to move away from a Fordist system?

Firstly, students come to the system partially completed. However, the system assumes that every student comes with no or limited knowledge or skill in the vocation they are studying.

This is the, heavily criticised, ''deficit model'' of education, where prior knowledge is not well catered for.

At any given time, in a class of 30 students you will find 30 different levels of skill development and knowledge acquisition.

A Fordist system can't handle the students who develop skills or knowledge slower or faster than the pace that the system is set up for. In a Fordist model, any part of the system that is too fast or too slow will make the whole system less efficient.

The result is that we have fewer course completions than we should, thousands of people in the workforce with incomplete qualifications, others spending unnecessary time in the system when they demonstrate the learning before the course time is completed and ultimately inefficient resource utilisation.

Thirdly, a Fordist system is slow to respond to changing training needs.

Currently, the VET system takes between one and three years to go from identified training needs to fully trained graduates.

At the current pace of change, half of an individual's skills are redundant in under three years.

Clearly, this creates a gap between employers' expectations and what a Fordist system can deliver.

Finally, a Fordist system assumes that a car is built in one factory. Today component systems for cars are built in different factories that may even be located in different countries.

Students learn in and from many different contexts - in class, from YouTube and the wider internet, from books, at work, from parents or mentors, in sports and service clubs, etc.

The rigidity of our current system (which equates time with learning and has no links between learning contexts) cannot account for the highly-personal nature of learning. So, while the ministry has a desire for a seamless system that allows students to customise their learning, doubling-down on Fordism is absolutely the wrong way to go about this.

Make no mistake, the proposed reform is taking the worst of our current Fordist system and making them the core of the new system.

-Prof Richard Mitchell teaches on the bachelor of culinary arts programme at Otago Polytechnic. He has had more than 150 publications published over 20 years. His work explores learning in contexts as diverse as tourism, wineries, simulations and culinary classrooms.

-In Part 2, Prof Richard Mitchell will explore three examples of best practice that move beyond the Fordist approach to VET: the Basque Country; Finland, and Otago Polytechnic.