Steps are being broken up and soil dug up, retaining walls will be built and concrete slabs installed, but the result of the disruption should be peaceful.

Construction of the Archibald Baxter Peace Garden and national memorial for conscientious objectors has started at the intersection of George and Albany Sts in Dunedin.

The project was hampered by false starts in securing a location and it took almost 10 years of fundraising before the physical work at the chosen site began this week.

Project manager Stuart Anderson, from Signal Management Group, said it should be completed by the end of April.

New pathways, steps, plants, lighting, handrails and a sculpture would be added. 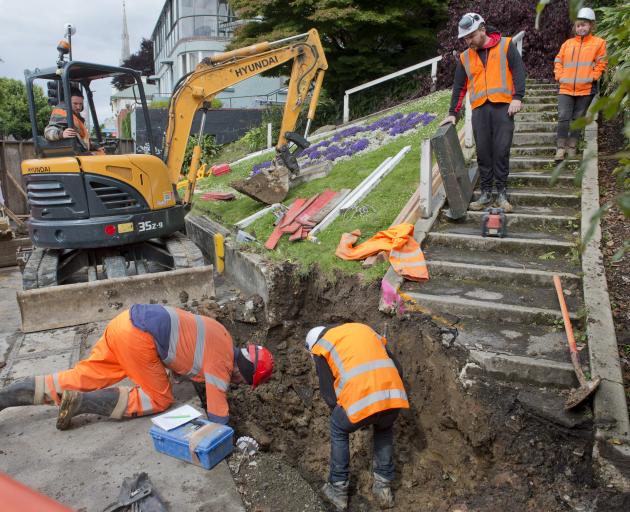 Archibald Baxter Memorial Trust chairman Kevin Clements said the peace garden was intended to be a memorial to all conscientious objectors in New Zealand.

People who chose not to fight were courageous and heroic, he said.

"Their suffering enlarged the civil liberties of us all," Prof Clements said.

"Archibald Baxter was one of those who chose not to kill and he suffered enormously as a consequence.

"In particular, he endured the ravages of Field Punishment Number One, which today would be considered state-sponsored torture."

The sculpture to be installed at the site, designed by Shane Woolridge, would be an abstract expression of this punishment.

Prof Clements said the memorial would be a place of reflection on the folly of war and a place of peace and tranquillity.

"It’s going to be great when it’s finished."

A blessing was carried out at the site by Rev Greg Hughson this week.

Eschatology is not relevant.

Mr Baxter was a Christian Pacifist, driven by moral compass. Naturally, he was met with imperialist outrage.