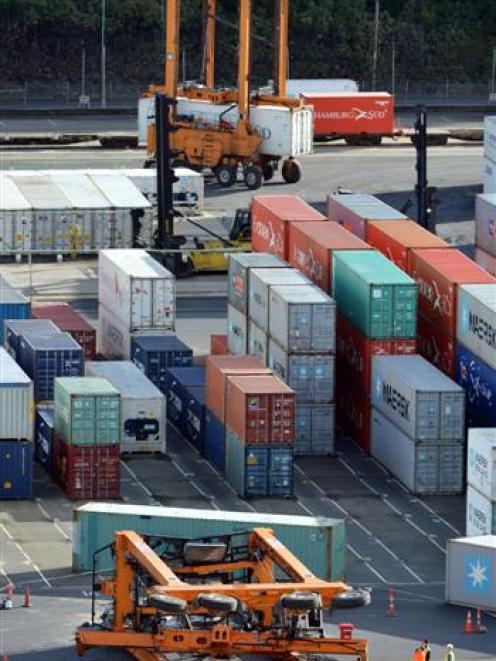 The straddle carrier that toppled at Port Otago, Port Chalmers, yesterday. Photo by Gerard O'Brien.
The Port Otago worker injured in a workplace accident on Wednesday was in a serious but stable condition last night.

The man was taken to hospital after the straddle carrier he was piloting toppled, trapping him in its cab, at Port Otago's Port Chalmers facility about 1.15pm on Wednesday.

He suffered ''very serious injuries'' when he plummeted 14m inside the cab.

A resident, who did not wish to be identified, said the community had been rocked by the incident.

''We all know him, which makes it quite scary.

''Everybody here knows somebody at the port and it's such a small, tight-knit community - it's affecting a lot of people.''

The resident said shock set in when news of what happened became apparent.

''We probably all knew [about the accident], unfortunately, before the parents did. As soon as we all found out, we said `Oh my God'. It was quite scary.

''Some of the girls [at the port] were quite badly affected and had to go home early.''

Resident John Purvis (65) said he was stunned to see the size of the carrier involved.

''I came down [to the wharf] this morning and saw it still lying there. I thought `bloody hell, that's a hell of a fall'.

''It was mentioned in the news the type of machine it was and of course I didn't really have an idea of what that machine looked like. I came down here and saw it and it's a huge thing. The poor guy.''

Port Otago and WorkSafe New Zealand are conducting separate investigations and were examining the scene yesterday.

Port Otago chief executive Geoff Plunket said all rostered staff had returned to work. Routine counselling was available. Staff were encouraged to take time off if they needed to.

''If anyone didn't feel up to it, then they've got our full support. We could manage without them or someone else could do the work.''

The driver was a valued member of staff and the company continued to be deeply affected by the accident, Mr Plunket said. He would not be drawn on what caused the carrier to tip over.

''We will be conducting a very thorough investigation. It's important we come to the conclusions we need to, so that we can prevent it ... happening again.''

WorkSafe had given clearance for Port Otago to move the carrier and that would probably be done today.

Fulton Hogan heavy haulage equipment would move the carrier to an area within the wharf on Beach St.