Writing up a star ship 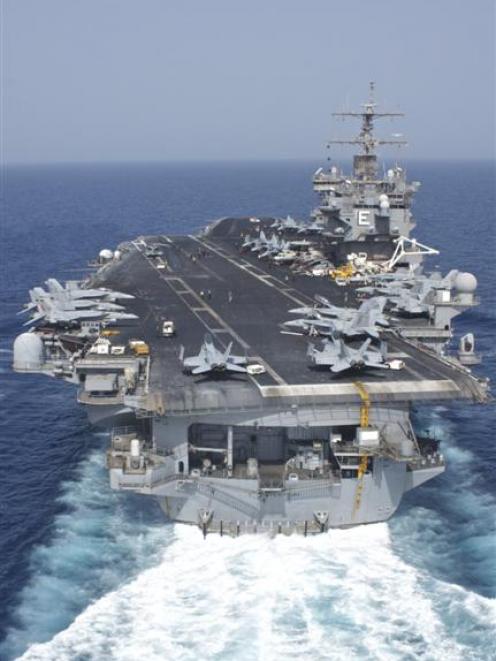 USS Enterprise and its rear fantail deck, still referred to by the Maori name for a fantail, Piwakawaka. Photo by Dave McKay.
A Dunedin doctor is about to dock after an epic ship journey.

Dave McKay, of Karitane, is finishing a book he has written about the pride of the United States Navy - the aircraft carrier USS Enterprise.

"I just love that ship. She was so experimental. It was built in 1961 and was the first nuclear-powered carrier. 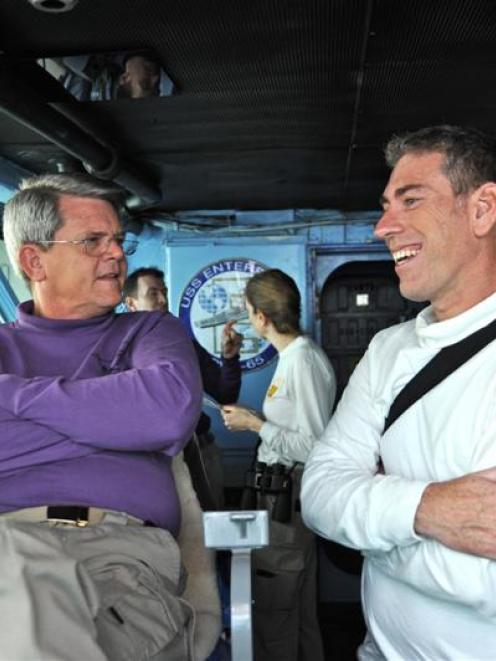 Dr Dave McKay (right) talks to Captain William Hamilton on the USS Enterprise bridge. Photo from US Navy.
There was only ever one of them made and it's been in service ever since. It's the oldest ship in the US Navy, except for 'Old Ironsides' [the USS Constitution].

"The history hadn't been fully told before and I felt a need to write something about it, so I contacted the US Navy for permission and, to my incredible joy, they said yes. The navy was very supportive. It took quite a bit of lot organising and I had to get a number of clearances."

Dr McKay, who is a general practitioner at the Helensburgh Medical Centre and Otago Community Hospice, has been hosted by the US Navy four times aboard the NZ$546 million aircraft carrier since 1995.

Enterprise has sailed through some historic times, including the blockade of Cuba during the 1962 Cuban missile crisis, the Vietnam War and the first strikes on Afghanistan after the World Trade Centre attacks. The ship also starred in the 1986 film Top Gun.

"I was very mindful on board of not asking silly questions. My approach was a conversational one and I didn't go around with a notebook. I'd have a discussion and then go back to my assigned office space or stateroom and write down notes by memory," he said.

"It's a hot and scary environment and a lot can go wrong.

"If you do the wrong thing you can end your life. The jet blast of the Hornets as the tail swings around can easily throw you into the water. The heat was searing."

Some of Dr McKay's most exciting moments were when he left the ship.

"I had two helicopter rides, three catapult launches and two arrested landings. You go from flying to stopping in no time. From 150mph [241kmh] to zero in two seconds. It felt like all my internal organs were going to pop out.

"In a sense, it's a controlled crash and I thought my heart was going to come out of my chest. But, I was smiling on the inside and the outside."

The ship's 51-year tour of duty is about to come to an end and Dr McKay's 600-page book will be published by Christchurch publisher Willson Scott Publishing before the official inactivation at Norfolk Naval Station, Virginia, on December 1.

"I wanted to get the book done for the inactivation and to mark the end of the ship's life. She's getting a little old now and her combat systems, the radar and communications suites, although state-of-the-art, were becoming less reliable, often due to cables that were older than me."

Dr McKay left a piece of New Zealand on the USS Enterprise for its 5000 crew.

"They have a deck at the stern called the fantail, so I nicknamed it the Piwakawaka, after our own fantail bird," he said.

"They loved that and some of the crew still call it the Piwakawaka today."