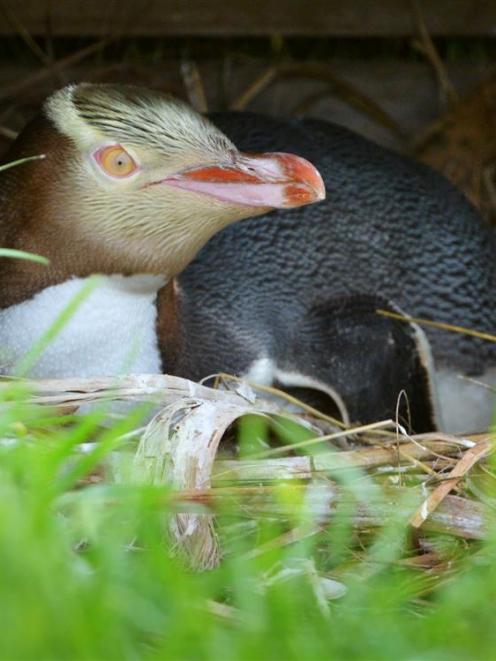 With the penguins' breeding season just under way, only half the nests normally found had been recorded on some of the peninsula's popular breeding sites.

The reduction is believed to be a direct result of the mass mortality event that killed 60 adult penguins on the peninsula last season.

The cause of the deaths is still unknown, despite autopsies and extensive toxicology testing.

Yellow-eyed Penguin Trust general manager Sue Murray said estimated minimum breeding pairs for the trust's three sites on Otago Peninsula had dropped from 15 to five in one site, 20 to eight in another, and eight to four in the other.

Many of those killed last season were adult breeders so some impact on this season was expected.

Doc ranger Mel Young said until other nest counts on peninsula beaches were completed, the true impact of the mortality event would not be known. Many of the small breeding sites checked were showing only half the number of nests compared with last year.

On the positive front, one of the larger sites had 25 nests, up from 21 last year, with many young birds nesting for the first time, she said.

''A lot of these new birds have laid two eggs. There are very few one-egg nests, which is unusual.''

However, it would not be known for another three weeks whether these eggs were fertile and if the new parents could keep both chicks alive.

''The younger birds' reproductive success is not the same as 15-year-old birds.''

There were many juvenile birds around which had survived their first season at sea in good condition and many ''unemployed'' birds that were not nesting this season.

''That often happens after a bad year.''

The situation meant the public needed to be even more careful on breeding beaches this summer, especially with dogs, she said.

They needed to be able to come and go from the sea to their nests to feed their chicks unencumbered.

''From when they hatch mid-November, it's critical.''

Penguin Place's Glen Riley said its beaches on the peninsula had not been hit as hard by the mortality event as the trust's, but it had still noticed a decline in nest numbers.

''It's bloody hard. It'll take a long time to recover after this.''

At one of its beaches, there were only four nests, compared with seven last year, and its main beach was down one to 12.

One breeding female was in its ''penguin hospital'' after washing up on the beach underweight and was now being treated with antibiotics.

''It's unusual to have her there, so we hope its not what's to come.''

The first chicks of the season were due to hatch next week while the next round were not due for a couple of weeks.

University of Otago scientist Dr Phil Seddon said there were many unknowns about the drop in nesting numbers but any drop was a concern.

''We have seen drops like this in the past and they have been followed by a rebound. So, we remain hopeful that will be the case this time.''

Much depended upon how many of the older, experienced animals survived.

A student project would be investigating which penguins had survived and if it related to their age and breeding history, he said.

It was thought there were ''super breeder'' penguins that were long-lived, bred every year and with a high level of success, he said. Their offspring were also thought to be keeping other colonies alive.

''They are very important.''

Tourism Dunedin chief executive Hamish Saxton said events such as the mass mortality highlighted the importance of protecting the penguins that were vital to parts of the Dunedin economy.

Dunedin's reputation as an eco-tourism destination was partly based on the yellow-eyed penguin and its rarity, so it was enormously important to those business based on showcasing it and other species, he said.

Five years ago, Australian economist Prof Clem Tisdell, of the University of Queensland, calculated that nature-based tourism relying primarily on the yellow-eyed penguin returned $100 million annually to the Dunedin economy, with a single breeding pair of yellow-eyed penguins valued at $60,000.