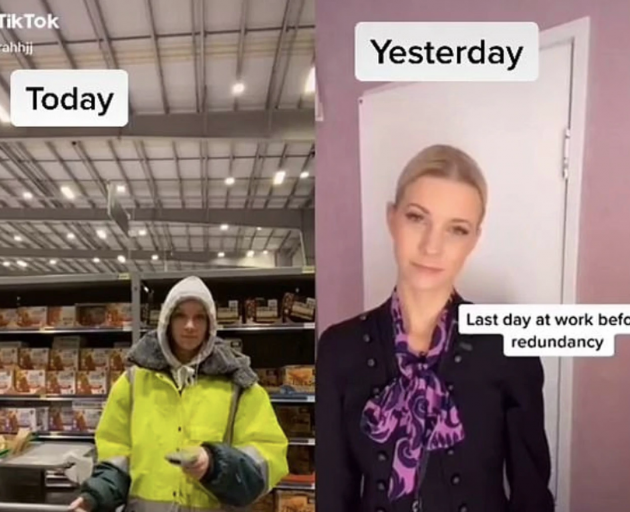 Sarah Jones hopes to work in the aviation industry again one day. Photo: Sarah Jones via NZH
A former Air New Zealand flight attendant has revealed she finished her job with the airline this week and is now working for a Countdown supermarket.

Sarah Jones posted a video on TikTok showing her last day at Air New Zealand on Wednesday, followed by work the next day at the supermarket.

Jones told the Daily Mail she was one of the many Air New Zealand employees who have had to find new jobs following the Covid-19 pandemic.

"It made everyone feel pretty gutted as we loved it at Air New Zealand," she said.

The flight attendant said she worked for Air New Zealand for five years and hopes to return to the industry once it rebounds post-pandemic.

In the meantime, she is happy to have found herself a job at the supermarket.

Her new job involves processing Countdown delivery orders and Jones told the Daily Mail many of her colleagues are also former flight attendants who have been made redundant.

"It's pretty hard to find another job at the moment as everyone is looking," Jones said.

"It's important to remember it doesn't matter where you work right now and to just keep doing what you're doing.

"But I miss working with new people every day, getting to bring people to visit New Zealand and being able to visit other countries with my friends," she added.

Her Tik Tok video shows side-by-side shots of Jones dancing, one with her flight attendant uniform on, on her last day working for Air New Zealand, and the next one wearing her Countdown clothes in the supermarket.

In her post, which includes a series of photos of Jones alongside her Air New Zealand colleagues, she opened up about the pain of losing her job in a pandemic.

"Do you know what it feels like to lose your job over something that you didn't do? I don't know how to explain it but it's pretty lame. Just because I've been carrying it well, doesn't mean it's not heavy. I've watched it fall apart around me for the last three months," she wrote.

"Today was my last day ever but at least I got to spend it eating cake with my pals."

Jones, alongside hundreds of her colleagues, was made redundant in May, in the wake of the coronavirus pandemic and its impact on air travel and borders around the world.