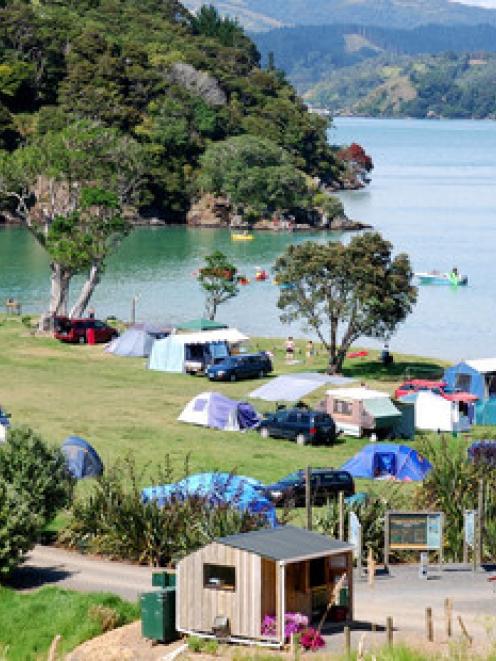 Whangaruru is a popular site for camping, pictured here is the DoC campsite. File photo / DoC
A Hamilton man who was electrocuted at a Northland camping ground yesterday was an incredible young man, who had time for anyone, a friend says.

Matthew Smith, 26, died after being electrocuted when he tried to cut the power of a noisy caravan, police said.

His body was found about 3am yesterday at Whangaruru Beachfront Camp, 50km north of Whangarei.

A friend of Mr Smith, who declined to be named, told NZME. News Service: "Matthew was an incredible young man, who had time for anyone who needed advice, a laugh or just an ear to listen."

Mr Smith had been staying at the camp with a friend and his friend's father when he became frustrated with noise coming from a nearby caravan, Northland police spokeswoman Sarah Kennett said.

He had left his own campsite site at about 12.30am to deal with the issue, she said.

"Allegedly he was frustrated about a noisy stereo and he would have gone to disconnect the power."

It appeared he had attempted to cut the power cord to the caravan with pliers, Ms Kennett said.

He was found around 3am by the occupants of the caravan, she said.

It was unclear how many volts the power cord carried, but it was thought to be around 240 volts.

Mr Smith had worked as a lighting technician at Waikato Sound and Lighting for the past five years, the company's director Jonathon Roberts said.

"What happened was just a crazy, crazy thing to happen."

"He'd been staying there a few nights with some mates. The police have got it all in hand," he said.

A spokeswoman for the campground declined to comment about the death.

"It's all been ticked off by police," she said.

A Worksafe New Zealand spokesman said it had been notified about the incident.

The company's website said the harbour was a "haven for boating, fishing and water sports while the more adventurous can enjoy the open sea and waves of Oakura Beach".