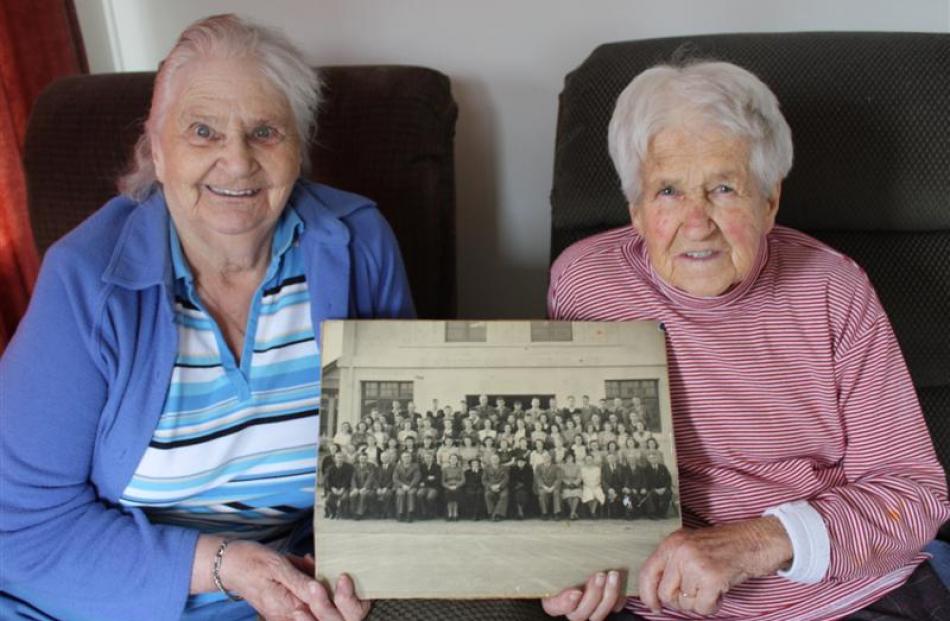 When teenagers Meryle Ball and Glad Toole met at Invercargill's Kingsland Biscuit Factory in 1940, they instantly became the best of friends.

Meryle was 14 and Glad was 13 when they were assigned to work at the Jed St factory to replace men away fighting in World War 2.

But they lost touch after Meryle left the factory about seven years later to get married.

Meryle began using her other Christian name, Gloria, and her married name of Colvin, while Glad also got married and became Mrs Munro.

Neither knew where the other lived until an amazing coincidence brought them together again this week for the first time in almost 70 years.

Both share the same home carer, Pam King. She had seen a photograph of Kingsland staff at Glad's house and had heard stories about her time there. Then Gloria also mentioned she had worked at the biscuit factory.

Did they know each other, Pam asked. It turned out they did, and were delighted to have found each other again.

With the permission of her employer, Ms King brought the friends, Gloria now aged 89 and Glad 88, together on Tuesday for afternoon tea and a natter about old times.

''My brothers got them,'' Gloria said.

''The biscuits were so hard they used to call them dog biscuits. They said they were like rocks.''

In other departments, blocks of chocolates, ''Town Talk'' boxed chocolates, sweets and toffees were manufactured.

''I'm being honest here; we used to steal chocolates and take them home. I had just taken some when the boss, Arthur Kingsland, came in so I put them down my bra. When I got home they had all melted and I had chocolate boobs.''

The girls shared their leisure time too, recalling bus trips to Bluff and a train trip to Dunedin.

''We used to go to the pub to look for men but we never found any - not then anyway.''

They also remember the end of World War 2.

''Mr Kingsland came in, told us the war was over and gave us half a day off,'' Glad said.

''He could have given us a whole day,'' Gloria said.

Glad worked at the factory for about 15 years until she left to get married. Neither she nor Gloria remember when the factory was closed or demolished but know the Invercargill central fire station now stands on the site.

Despite the years that have passed, they also remember the names of many of the people in the staff photograph, which they said was taken after a staff dinner and dance some time in the early 1940s.

''I don't even know if any of them are still alive. But I remember working with them,'' Glad said.

Gloria and Glad say now they have found each other again they will be keeping in touch regularly. And who knows - maybe it is time for a reunion of former Kingsland staff.