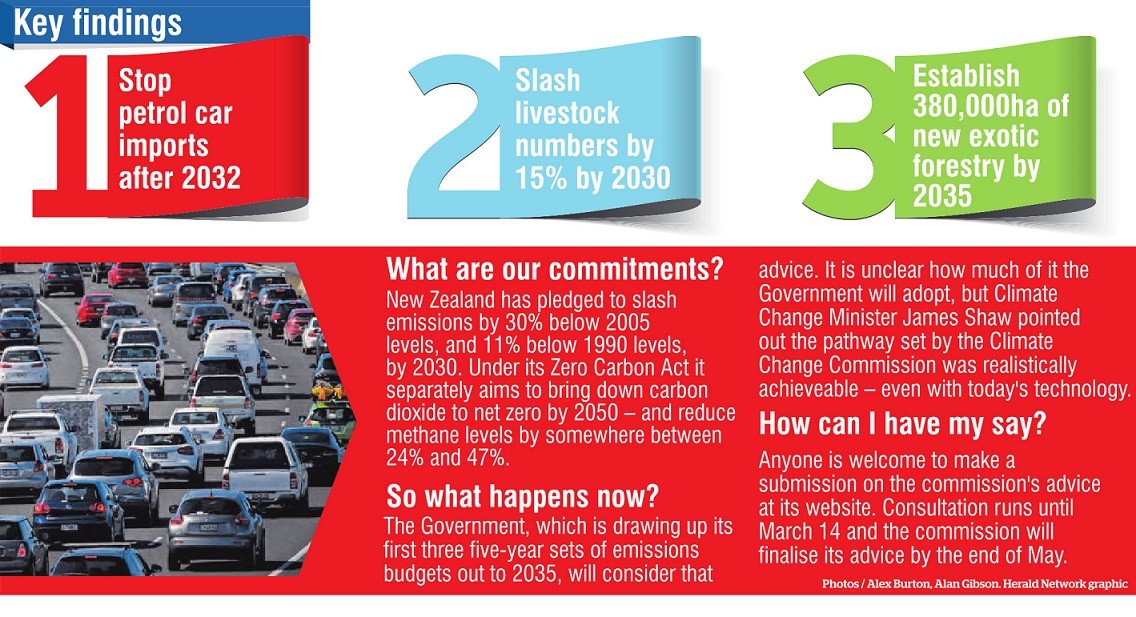 An electric vehicle in your garage and trees as far as the eye can see will be crucial to achieving draft emissions targets released by the Climate Change Commission yesterday.

The report, if adopted, would require fundamental change in the way New Zealanders live and work, with its call for the near elimination of fossil fuels and a resulting transformation of industry.

"We are not on the track [to meet emissions targets]," commission chairman Rod Carr said.

"We have got to get on the track, and there are technically feasible, economically affordable and socially acceptable choices we can make, and we need to get on with it."

The commission, an independent body, was set up by the Government in 2019 to advise it on how to achieve emission targets agreed to by the previous National-led government when it signed the Paris Agreement on climate change.

The 188-page draft advice is now open for public consultation.

The future of the Tiwai Point aluminium smelter looms large in the commission’s report.

It had assumed in its forecasting that Tiwai — which uses 13% of New Zealand’s energy — would close and the energy from the Manapouri scheme used by the plant would be redirected to the national grid by 2026.

"If that turns out not to be true then other things will need to change," Dr Carr said.

Infrastructure would have to be built for a vehicle fleet which the commission hoped would be 40% EVs by 2035, and government support would likely be required to make that happen, Dr Carr said.

"We know this technology is on a pathway to become cheaper and more readily available over the next 15 years."

The commission also envisages planting an additional 1.4million ha with trees, an area roughly equivalent to a third of Southland or Otago.

Dr Carr said of New Zealand’s approximately 26million ha, about 11 million ha was pastoral and some would likely become available for planting, much of it in native trees.

"We think it’s likely natives would be established in smaller rather than larger plantations closer to existing natives ... there is every reason to believe that New Zealand can do this that we can develop the propagation, protection and planting for an extension of our native forests," Dr Carr said.

The report did not factor in future new or currently unproven technologies, but Dr Carr said he expected many current occupations would fall victim to the decarbonisation of the economy.

"There is no doubt that there are jobs in greenhouse gas intensive industries which will not continue through the decades to come, and the holders of those jobs will be most impacted compared to others," he said.

"Those most impacted and least able to respond should be supported by the rest of New Zealand, and we make that case ... but there are some very real upside opportunities here as well."

Should the commission’s advice be accepted, jobs would be created to add further electricity generation capacity, in reforestation projects, and in a range of infrastructure projects, he said.

"The advice also highlights that the cost of action on the economy is not as great as many have previously thought, and in fact action on climate change is an economic opportunity for New Zealand."

Minister for Climate Change and Green Party co-leader James Shaw said having read the direction the commission had set out, he was more confident than he had ever been that emissions could be reduced.

"If we act now, we can join with other leading developed countries to set an example to the rest of the world and show what can be done — the transition to a net-zero carbon economy in a way that gives people good job opportunities and certainty about how they will provide for their families."

National climate change spokesman Stuart Smith said while he supported New Zealand "doing its bit", changes needed to be tested to prove they were effective and rational.

“The Government must have a reliable idea of how many tonnes of greenhouse gases a policy will remove from the atmosphere before deciding whether or not to fund it," he said.

“New Zealanders will want to know whether the proposals released today are cost-effective and fair, and what the implications will be for people’s jobs and livelihoods."

“Debt funded and ineffective Government spending to reduce emissions will simply displace long planned private sector investment, and not reduce a single tonne of carbon that would not otherwise be delivered by business and industry."

Dr Carr said science had been clear for decades that the planet was warming.

"What is the probability of regret if it turns out that we took action to create a cleaner, greener, healthier world and maybe we didn’t need to?

"On the balance of risk and likelihood, it would be foolish not to take action because you are taking a hell of a bet if it turns out that you should have."

When you look at that make up of this committee, its like asking the Nazi party to do a review of their behavior in World war 2

mmcc is a scam, as a tiny nation that can have no effect on anything, no matter what we think about ourselves.
Water vapour is a bigger deal than co2.
All this will do is make the poorer poorer, while the elitists look down from above laughing how we fell for this scam.
Don't be stupid people, it's been hotter and colder before, long before us and carbon was decided as a money making scheme. Don't let them crush you under their thumb

Not having done research into it myself I'll accept that the planet is warming and it sounds like the only way to even attempt to halt it, if you believe the 'experts' models, (which as an aside appear to have a win/loss ratio worse than the warriors) is for the whole world to make some fundamental changes. A requirement that a massive chunk of the world's population has made it clear they cannot/will not do. So the question then becomes, would it not be a lot more sensible to put the time/effort and money into research into how we will deal with and live in an inevitably warmer planet? Rather than flushing money down the dunny trying to drive down NZ's emissions which will have no material impact whatsoever, while raising the cost of just about everything and costing the most vulnerable their fossil fuel reliant jobs. Just a left field thought.

Some key points from the report:
-Emissions from international aviation and shipping are not currently part of the 2050 emissions
reduction target in Aotearoa.
-The Commission does not provide advice on the target range
for biogenic methane emissions set for 2050.
-We advise that the first Nationally Determined Contribution is not compatible with Aotearoa making a contribution to global
efforts under the Paris Agreement to limit warming to 1.5°C above pre-industrial levels.
-We assume the average household travel distance per person can
be reduced by around 7% by 2030,
-Nitrous oxide emissions are difficult to reduce but will be addressed somewhat through
supporting farmers to implement emissions reducing practices and by the development of
technology such as inhibitors.
• New native forests can be established on steeper, less productive land to provide an enduring
source of carbon removals.

Nothing more than political dogma designed by those with plenty and little to lose.

Tell it to West Australia.