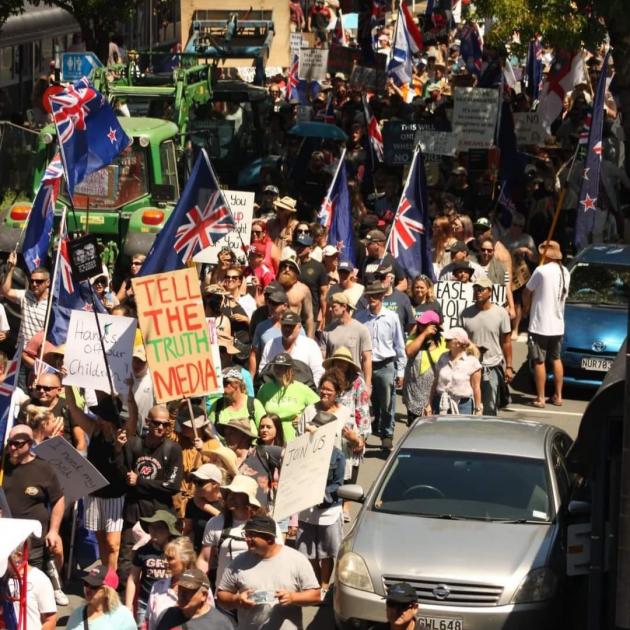 A crowd of demonstrators from the Freedom of Rights Coalition descended on the North Canterbury town on Saturday and moved through Rangiora's main street, protesting against the Government's vaccine mandates.

But a worker in the town believes that all the demonstration did was disrupt the local business community.

The woman, who requested anonymity, said the demonstration significantly hurt the store's turnover and that employees and customers were left frightened by the behaviour of some demonstrators.

It was alleged cars were left unattended by marchers in the middle of the road, near shop premises as customers migrated indoors.

"I did spend about 20 minutes helping frightened people across the road, including an elderly man in a mobility scooter and two terrified teenagers."

Other demonstrators were alleged to have screamed at customers before proceeding to slam a placard sign against the store window.

"We had vulgar stickers plastered all over our outside area which we continuously ripped off.

She said other neighbouring shopkeepers copped similarly aggressive treatment and that their QR code signs were ripped off shop fronts.

"The sense you got was that one tiny thing would've tipped it into violence...it was frightening to watch."

A protester, who also did not want to be named, told LDR that it was always intended to be a peaceful march, with full respect to all around and that demonstrators who resorted to intimidation were "not considered part of it".

A reporter at the rally said they also copped abuse when taking photographs.

Attempts to persuade demonstrators not to talk to customers were also responded to with hostility, she said.

The Waimakariri District Council confirmed no permit or approval was requested by the organisers, or granted.

In response to alleged intimidating behavior by demonstrators, police said they acknowledged the lawful right to protest.

"We encourage individuals attending protests to conduct themselves in a safe manner and adhere to current Covid-19 red restrictions, which are there to ensure the safety of all," a spokeswoman said.