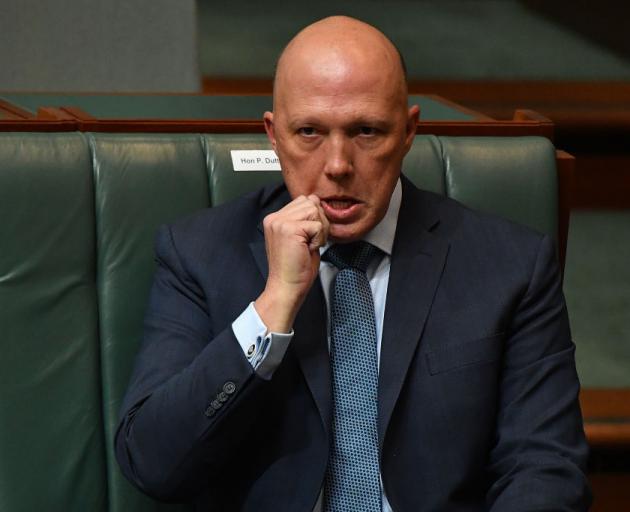 An Australian news segment featured extraordinary access given by Australia's Border Force to hound Kiwis being led across the tarmac in handcuffs before being deported.

The 9 News report, which saw the journalist questioning deportees directly, also included incendiary comment from Australian Home Affairs Minister Peter Dutton, who told the channel the flights were Australia's way of "taking the trash out".

"I think they should reflect on how they are portraying the transfer of people back to New Zealand. Dutton's comments reflect his own personality."

Minister for Covid-19 Response Chris Hipkins also slammed the comments and the Australian deportation policy in general - which is not reciprocated by New Zealand.

"This is Australia exporting its garbage to New Zealand.

"These people, their criminal offending has been in Australia.

"For all intensive purposes many have lived the vast bulk of their lives in Australia.

"This is a deplorable move by the Australian Government and we completely disagree with it, however they are entitled to do it."

Asked if he had inferred to the Kiwis as "garbage" himself, Hipkins said that was not his intention and he should have "chosen better words".

"I didn't mean to suggest that, that is Dutton's way of describing it."

The comments from her ministers were starkly different to the subdued tone taken by Prime Minister Jacinda Ardern, who refused to be drawn into a "tit for tat" when questioned on the topic.

"Everyone is aware of our view on this and it is strongly held. The Australian government is within their rights, it just so happens we strongly disagree," she told reporters.

"We cannot be the dumping ground for everything wrong that's happened in Australia with people and criminal behaviour," she told 1News.

"They need to have some of them come back to them."

She also said the relationship between New Zealand and Australia at the Government level was probably the "worst" in many years.

However, Ardern disputed this, saying despite consistently voicing their opposition to the Australian deportation policy it had "not changed the fact we have a very strong relationship".

"There has been no breakdown in our relationship at all. We have an excellent relationship with our counterparts, myself and Scott Morrison speak frequently and work together often, it just so happens on this issue we strongly disagree."

The issue of the 501 deportees has been a hot topic in New Zealand, with the influx of criminals making waves in the underworld and leading to a series of high-profile crimes.

The policy, previously described by Ardern as having a "corrosive" effect on transtasman relations, has been criticised for its indiscriminate nature which has seen New Zealanders who have spent a lifetime in Australia deported after committing minor offences.

The Australian Border Deaths Database, collated by Monash University, has recorded four deaths of New Zealanders associated with visa cancellations, among them a man who had been in Australia since he was a toddler.

He committed suicide 18 months after being deported to New Zealand following a prison term for a string of minor offences. He left a young child and his immediate family in Australia.

More than 700 people had been deported in roughly the past year, he said.

"We're talking about the most serious offenders here and our country is safer for having deported them," he said.

Given the opportunity to question a female deportee, whose face was blurred, the journalist asks: "How does it feel to be kicked out of Australia?"

Told to "f*** off" by the woman, Fabris counters with: "Our country doesn't want you, are you excited to go home?"

But a woman who works with deportees in New Zealand says the report didn't accurately reflect the reality of the policy and could make life harder for returnees.

Aimee Reardon, who works with returnees in her role with Prisoners' Aid and Rehabilitation Society (Pars), told the Herald that returnees already struggled with thinking that locals recognised them or were looking at them, when that was not always the case.

She said that the report didn't accurately reflect the ratio of New Zealanders coming back with relatively minor charges, saying they form the majority of deportees - and characterised Peter Dutton's comments as "ignorant", saying the minister was "ill-informed".

She also said that racism played a part in how the policy was enforced, saying there were "ulterior motives" at play.

She said his comments would hit hard for returnees, many of whom already needed counselling to "see themselves as people" again.

She said she has spoken to one returnee was "really upset" after seeing the report and concerned that his family in Australia might see it and it might affect the perceptions of people in his new community.

Australia's deportation of criminals born in New Zealand has been a sticking point in our diplomatic relationship with "The Lucky Country" since they began enforcing the policy in 2014, under s501 of the Australian Migration Act.

Many have no links to New Zealand, having shifted to Australia at a young age and going on to have families and put down roots.

"New Zealand and Australia's relationship is being tested," she said, pointing out disparities in many areas of how the respective countries treat each other's citizens before taking aim at Morrison over the deportation policy.

"We have a simple request. Send back Kiwis, genuine Kiwis - do not deport your people and your problems," Ardern said.

She noted that some deportees had found their way to crime years after leaving Aotearoa, noting that when they left they were "too young to become patched gang members. Too young to be organised criminals."

"We will own our people. We ask that Australia stop exporting theirs," Ardern said.

Morrison shrugged the comments off and said there would be no change as the policy was "not directed to any one country or any one nationality whatsoever".

"It is a statement of Australia's immigration and border laws that if people that are not citizens commit crimes in Australia, then they have violated the terms of being in this country."

The Dutton, Morrison combo has definitely contributed to the nationalistic colonial mindset that has reawakened in Australia. In light of other forces including the sexual harassment scandals plaguing Canberra. It's not surprising they do their level best to shift their focus to steer away from uncomfortable issues. Easier to hit the Kiwis now and then to release some pressure....

So much from our "mates" over the ditch. Why dont we send the ChCh murderer back where he came from

Peter Dutton is an extreme alt-right fascist who makes tRump look like a nice open minded intellectual. There is some stiff competition to see who is the most evil person in the Australian Federal Gov, but Dutton is the clear leader.
There is a reason why the terrorist who shot up Christchurch comes from Australia, and that is because there are a lot of white supremacists here. Ask Dutton to renounce them and watch him squirm.

Our current Government blame the spike in gang crime on these people, so they are trash!!!
Is it a crime now to tell the truth?