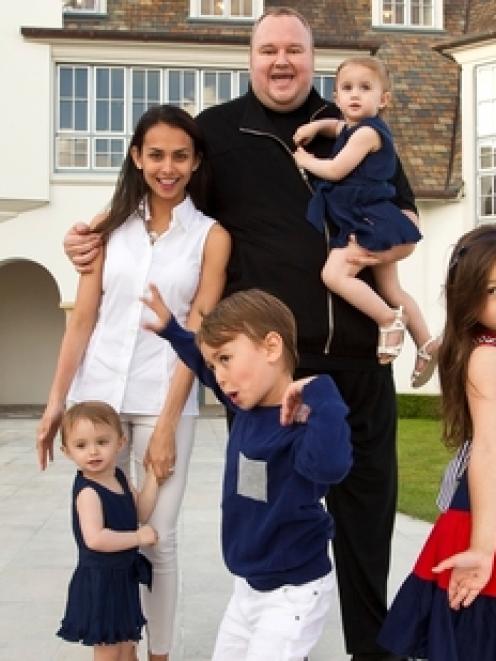 In a statement released last night, Dotcom announced his marriage of five years to his 26-year-old wife was over.

"Mona and I have separated," he tweeted. "This is a family matter and we would ask for privacy at this difficult time."

It comes in the same week as the Immigration Service ordered the deportation of all four nannies employed to look after the couple's five children.

Mona is understood to have left the Coatesville mansion without her children last Monday. It is not clear where she is living, but sources said she had not left the country.

She now holds 26 per cent of Mega - the online storage service started by Dotcom - through a corporate trustee company.

Two days before his wife left, Dotcom cancelled an appearance as a special guest at the Mana Party's Te Arawa Kapa Haka festival due to a "personal family issue".

The marriage breakdown may have played out on social media. On May 5 Mona retweeted a post from her soon-to-be estranged husband: "No hater can make you feel bad without your consent."

On the day she is reported to have left the mansion, he posted a Tweet: "Somewhere, right now, someone is getting something you wanted, but couldn't get, and they didn't try, or even want it ;-)"

A despairing Dotcom told the Herald on Sunday this week that the deportation of the nannies was further evidence of a Government determined to ruin him by any means.

"This is completely outrageous and unfair and it's just in line with all the other mess that has happened with me and my family," he said. "It's tearing my family apart.

"The last two-and-a-half years have destroyed my family and now they are putting this additional stress on us and it's just completely unfair."

The four nannies were issued with removal orders by Immigration New Zealand after their work visas expired last week and must leave the country within a month.

Dotcom, who faces extradition to the United States over allegations of criminal copyright breaches, was concerned about the impact it would have on 6-year-old Kaylo and 4-year-old Kobi.

Both children have autism and a radical change would have a dire impact on their health, Dotcom said.

"The nannies are crying. They are completely destroyed," said Dotcom.

Immigration New Zealand area manager Michael Carley said he was unable to comment on the case but visas are assessed "in accordance with relevant immigration instructions".

These required a labour market test to show no New Zealanders were available or could be trained to do the job before a visa could be granted.

Overstayers have 42 days to appeal the ruling on humanitarian grounds.