By Kristie Boland
0 Comments
Having fish and chips in the park is nothing out of the ordinary for many families.

But for Ruth Markham-Short and Jeremy Smith, their outing with family and friends at Redcliffs Park in Christchurch had special significance. 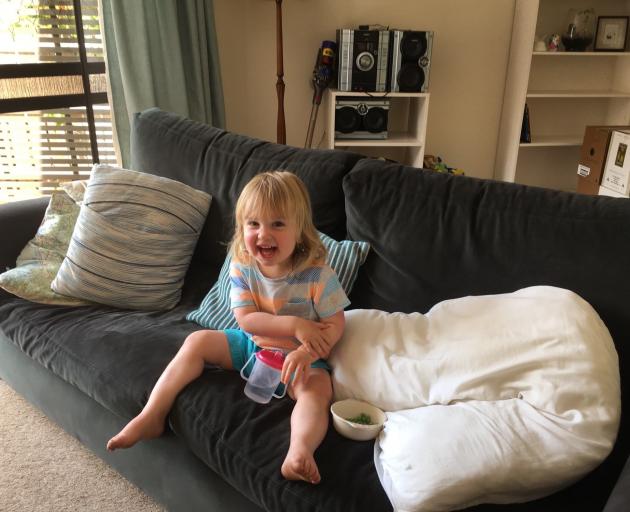 This photo was taken the day before Reuben died. He was his happy self, watching Spot the Dog while eating his favourite treat - frozen peas. Photo: Supplied
They gathered to celebrate and remember their 23-month-old son, Reuben Smith, who tragically died from meningococcal septicemia nearly a year ago.

“It’s about a bit of time with Reubs, the anniversary is coming up. The lead up to it is hard. Being here with family and having something to celebrate is nice,” said Ruth.

The celebration at last week's gathering was for the installation of new swings at the park in memory of Reuben, who would go there with his parents.

Reuben was a healthy boy who had not been sick before, so when he woke at 4am on December 17 with a high temperature, it was unusual.

He showed signs of having a stomach bug. Then at 10am that day, Ruth and Jeremy took him to the local medical centre.

By noon, it became clear there was something seriously wrong.

Ruth Markham-Short and Jeremy Smith with eight-week-old son Rupert at Redcliffs Park. The couple have donated a swing set in memory of their son Reuben. Photo: Supplied
Reuben had developed a rash and was rushed to hospital to be treated for meningococcal septicemia, an infection of the bloodstream that causes organs to shut down.

Said Jeremy: “When we went into ICU to see him he was just a different boy. The rash had spread all over him, he was purple. It’s so brutal, it’s the worst disease.”

The doctors and nurses did everything they could for Reuben but his body had started to shut down and there was nothing more they could do.

“We were told about an hour before he passed that there was a high chance that he wouldn’t make it,” said Jeremy.

Said Ruth: “It was just so fast, so fast . . . It’s a bit like having your kid tied to the railway tracks and seeing the train coming and not being able to do anything about it.”

Said Jeremy: “It went from waking up at four in the morning, thinking he’s got a tummy bug, to him passing away at 10 past five that night.”

Up to 15 per cent of people carry the bacteria that causes meningococcal disease. The chances of Reuben dying from it were .0002 per cent, his parents were told.

When Reuben died, the Redcliffs and Sumner community rallied together to raise money to support his parents.

Now that money has been donated back to the community in the form of new swings, Reuben’s favourite thing to play on.

The purple swing set, Reuben’s favourite colour, was installed at the weekend. The community raised $4800 for Ruth and Jeremy, which was used to pay for the swings.

“We wanted to do something meaningful with [the money]. We wanted to give back,” said Ruth.

The swings are a way to say thank you to the Redcliffs and Sumner community for supporting Ruth and Jeremy through the most difficult year of their lives. The swing set gives Ruth and Jeremy a place to go to remember their son.

“It’s a gift from us but in some ways it’s been healing for us,” said Ruth. 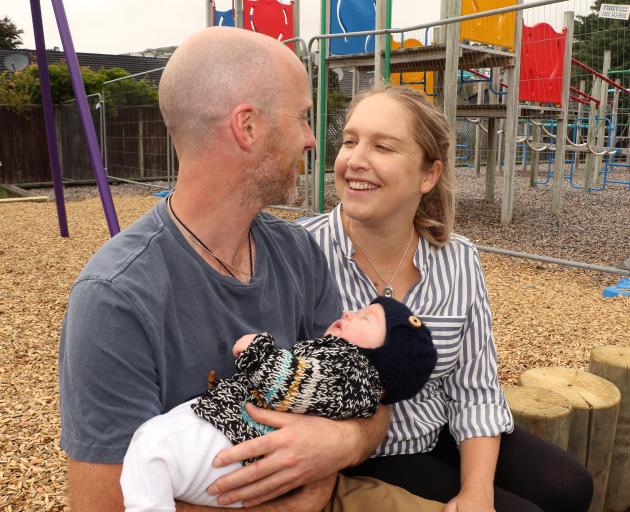 Ruth Markham-Short and Jeremy Smith. Photo: Supplied
After hearing about Reuben, many people in Redcliffs, where he went to pre-school, vaccinated their children against meningococcal, said Ruth.

“It’s too late for us but if we can stop anyone else going through what we’ve been through.”

Ruth and Jeremy said Reuben was a “dream of a child.”

He was happy, full of energy and extremely observant. He loved exploring his world, animals and the sandpit, often coming home from pre-school with sand in his pants.

Reuben left an impression on a lot of people.

His teachers at St James Preschool described him as one of the most relaxed kids they’d had.

“We were proud of him, he was a really special child,” said Jeremy.

Said Ruth: “It’s tempting just to shut yourself off, live an unhealthy lifestyle and try to forget, but Reuben didn’t get the choice that we get. We get a choice to live, so as hard as it was, we just try to do our best for him.”

Ruth and Jeremy will be able to take their eight-week-old son Rupert to play on the swings when he is older. Baby Rupert has helped to heal his parents.