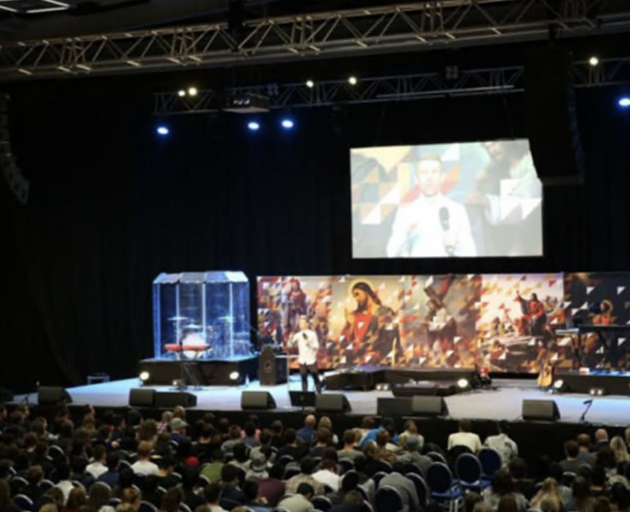 A Sunday service at Arise Church. PHOTO THE WIRELESS/ RNZ
Former members of Arise Church allege a naked pastor chased a churchgoer in Dunedin and that interns were mistreated on tour.

Confidential payouts were made to keep them silent about the treatment they received.

Former churchgoers allege Brent Cameron, pastor and brother of the church's founder John Cameron, was notorious for getting naked in front of interns, labelling them with derogatory nicknames, and boasting to his colleagues about his behaviour.

One former member alleges the worst of the behaviour would surface during the annual tours of campuses.

Matthew, who worked closely with John Cameron, saw events that took place on a tour in 2014 as a particularly unpleasant experience for one young intern.

"[What] took place makes me sick to my stomach to this day. What's worse is that other pastors knew about it, encouraged it and would frequently ask Brent to retell the stories."

During a night in Dunedin, he claims that while sharing a room with the young man, Brent Cameron took off all his clothes and began singing 'I was made for loving you'.

He then chased the intern around the hotel room until the man locked himself in the bathroom to get away.

Matthew claims Brent Cameron did not let the intern forget about the night, often saying to him "we will always have Dunedin".

He says due to the culture of silence, he was unable to speak out.

"I would later find out that the emotional toll of these events drove him to severe mental health challenges and complete disbelief in God."

The intern is not alone in still suffering from the emotional toll from their time with Arise.

The experience of another churchgoer, Mary*, led her to believe the pastors did not care for its people but only their pockets.

She claims John Cameron only took an interest in her after her husband made a donation.

Mary - who says she's had longstanding mental health issues - tried to reach out to John Cameron for prayer during a particularly dark time.

"If you tried to contact them outside of church, it was very hard to talk to them, my husband would joke and say I bet if we gave them some money they would talk to us and he did and sure enough, he talked to us."

Mary felt her health concerns and request for mental health support were dismissed.

"He'd make you feel stink by saying 'God told me this God told me that', so you felt like you had to do what he said."

Mary claims John eventually snapped at her during a phone call, ensuring she would never contact him again.

"It's just money, he doesn't care about people."

"Somehow he needs to be removed from being a pastor because people are still going to come to him for help and he's going to be screwing with their head."

Another young man says the trauma the church caused still affects him.

After becoming disillusioned with the leadership, Daniel* moved cities to a new campus for a fresh start but soon found similar problems.

He says one pastor in particular alienated a number of interns with behaviour similar to that of the Camerons.

After being encouraged to end a relationship with another member, Daniel says he opted to try Tinder but this made its way back to leadership and he was quickly admonished by Arise.

"I didn't understand how abusive it was for a long time, I know for a fact that he is responsible for multiple people leaving church, leaving internship, or just quitting."

Alan Vink has spent 40 years as a Christian leader and says he was devastated to hear of the revelations.

The director for Leadershipworx has deep concerns about the spread of Pentecostal Churches that - he says - have a strong corporate focus rather than a community one.

"Large churches are a completely different organisation to your small, suburban neighbourhood church; in many ways they are forced to go into a more corporate way of operating and that is not a good thing."

Vink has some advice for young Christians.

The media company's chief executive Andrew Fraser says they are aware of and concerned by the recent publicity regarding Arise Church.

"We do not condone any form of bullying or abuse and are pleased that an independent investigation is being undertaken, with the opportunity for all parties to be heard through the process."

Fraser says that for now, they continue to air Arise TV as the investigation proceeds.

"We are monitoring the situation and will actively review the appropriateness of airing Arise TV, reserving any final decision until the outcome of the independent investigation is known."

Both John and Brent Cameron are currently on extended paid leave as an independent review into the churches culture is carried out.

Arise will not say whether or not they will return.

"The board remains committed to those independent processes and will reach decisions about next steps following their completion."

Neither John or Brent Cameron have responded to repeated requests by RNZ for an interview.

At least 190 people have contacted a team conducting an independent review into the church's culture.

Beginning in early April, journalist David Farrier has been reporting in his online newsletter Webworm allegations from ex-members about Arise church and its leadership.

* Some names have been changed to protect identities.