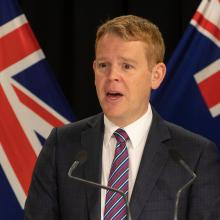 Minister of Education Chris Hipkins. Photo: NZ Herald
Education Minister Chris Hipkins says the Government is looking to enable international students to return to New Zealand if they can be quarantined safely.

His comments follow an assurance from Victoria University Vice-Chancellor Grant Guilford, who told the Epidemic Response Committee on Tuesday that the university could quarantine international students at zero risk to public health.

The international education sector is worth $5 billion a year, and the education sector, including secondary schools, has been feeling the financial squeeze from the borders being closed to non-New Zealanders.

Hipkins told media today that international students were more likely than foreign tourists to want to come to New Zealand if there was still a need for a 14-day quarantine on arrival.

'It's quite possible that we would be able to work with international education providers to manage a period of quarantine at the beginning of, say, a year's worth of study so they can come into New Zealand.

'That's something we're working through with the sector."

Once through a quarantine period, he said the students would not be a threat to wider New Zealand society if they were deemed Covid-free.

Hipkins said he would be reaching out to the sector in the next 24 hours to ask them to start work on "a quarantine-like arrangement" - not a self-isolation model.

"We couldn't be relying on trust, for example. We couldn't be putting them into a Hall of Residence and say 'don't go anywhere'. We would need to know it was an enforceable model.

'We would need to see assurance, a good concrete proposal, but we're certainly open to receiving that proposal and I've been making that very clear to the universities.'

On Tuesday Guilford told the committee that Victoria University could already provide a quarantine as well as Covid-19 testing.

"We can do this safely with no public health risk to New Zealand."

He cautioned the Government not to throw the "international students" baby out with the Covid-19 bathwater.

He added that the financial losses due to Covid-19 meant that Victoria University was open to a Government-managed and funded quarantine service, as well as further financial assistance for students such as hardship grants or a universal allowance.

Covid-19 was going to hit Victoria with a $30m to $40m loss, he said, and the university had already spent $500,000 on student hardship grants as well as $5m on subsidised student accommodation.

Prime Minister Jacinda Ardern has revealed that schools will reopen when the country moves to alert level 2, but distance learning will still be available for those unable to return, such as students in Covid-isolation.

Hipkins said the low number of cases in New Zealand meant there was very little chance of anyone carrying the virus entering school premises.

Schools would open at the start of a week, meaning they would have a week to prepare if the Government decided to move to level 2 on Monday.

Given the 100-person limit on gatherings, he said further guidance will be issued in the coming days about Halls of Residence, which often house more than 100 students.

All government needs to sit back and listen instead of going straight back to what they were doing before which was an utter failure.
Ask the citizens 'do we even want this again?'
Our schools is meant to be for us. Instead these lot come in push up rents etc.
The uni's want it because it's a cash cow and they get their empire, but we are seeing what's going down with that other cow related industry.

That they can empire from this is a joke and it needs stopped now. They are here to educate kiwis.
Why do they need to keep growing? Note here, they have all put their hands up for free money via construction and expansion. Well they can go away.