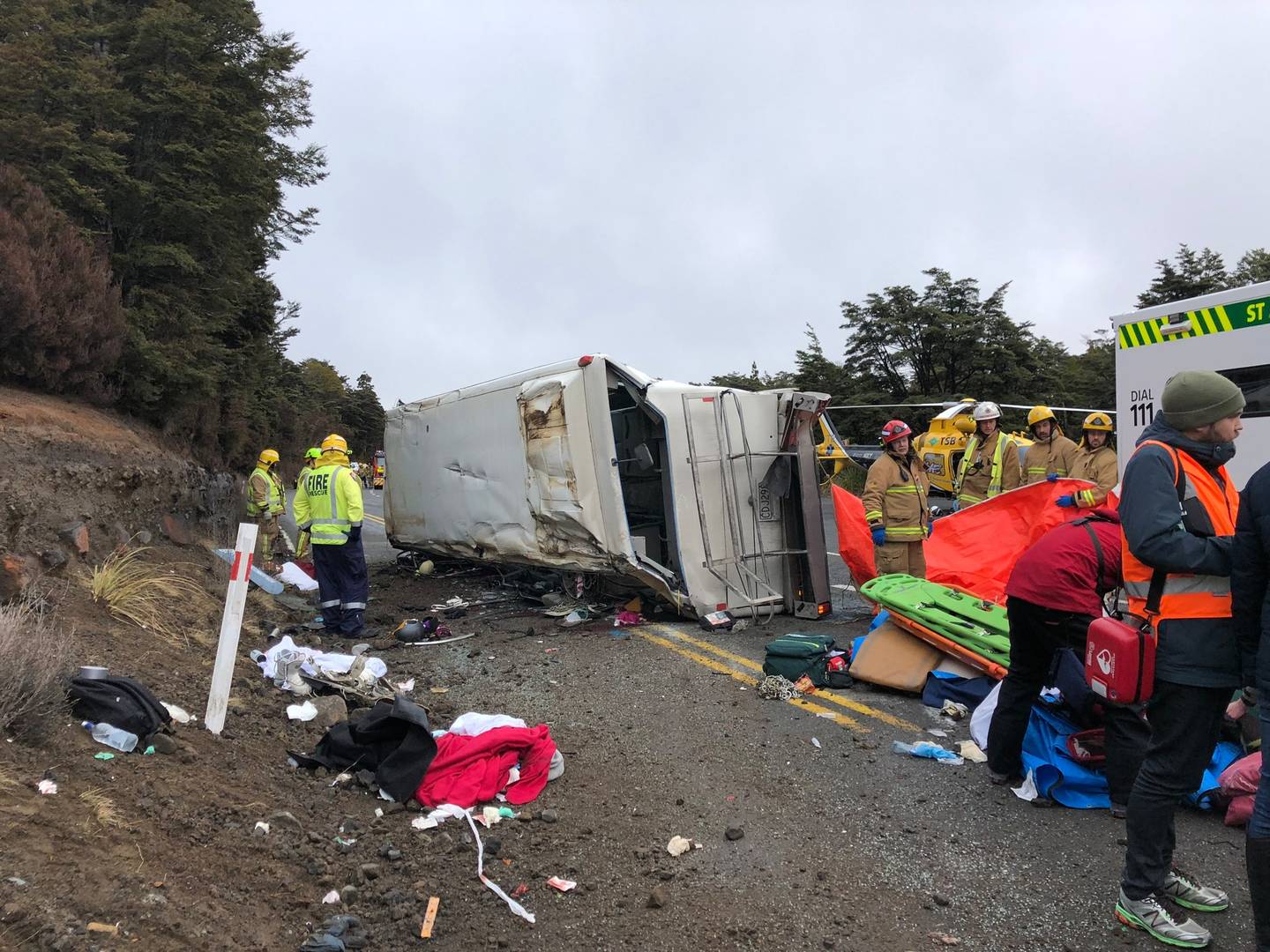 Emergency services at the scene of the Ohakune bus crash which took the life of 11-year-old Hannah Teresa Francis on July 28. Photo: NZ Herald
The Government has launched an investigation into the safety of buses after three crashes in two weeks.

Transport Minister Phil Twyford said the three recent bus crashes were a cause for concern and he has asked the Ministry of Transport and the NZ Transport Agency to look at the incidents.

The investigation comes after Taranaki bus driver Allan Campbell (69) was killed after his vehicle left the road and crashed into a ditch on State Highway 3 in Taranaki yesterday.

The incident was the second fatal bus crash in a fortnight and the third serious crash involving a bus.

Last Thursday, 19 people were injured after the bus they were travelling in crashed into a ditch alongside State Highway 1 in the Manawatu.

Another bus crash on Mt Ruapehu killed 11-year-old girl Hannah Francis after the vehicle she was travelling in rolled near Tūroa skifield on July 28.

All three buses involved in the crashes were Mitsubishi Fuso models, but the bus in yesterday's crash was said to be a "totally different" type of vehicle and much larger.

"Three crashes in quick succession, lives lost, a lot of injuries, we need to look at this and see what lessons we can learn," Twyford said.

"My thoughts are with the families – there has been loss of life and a lot of people have gone to hospital."

He said the investigation would allow him to see the facts and identify if there were any common elements within the three crashes.

"I have asked the Ministry of Transport and the NZTA to look at these three incidents and first tell me whether or not the certificate of fitness testing has been implemented with sufficient rigour," he said.

"Secondly I want them to look at all three cases and see whether there are any common elements that we can learn from."

Other issues that would be looked at were the age of the vehicles involved and whether seatbelts needed to be compulsory in buses, he said.

When asked whether the issue was with Mitsubishi Fuso buses, Twyford said, "I can understand why people would jump to conclusions based on the fact that the three incidents have involved buses of the same type, but again there may be other factors at play here."

He said the ministry would look at the incidents from a policy perspective, and NZTA would take a more operational approach.

"They will come back with a report and we will see if there are any further actions required.

"It is really important to get the facts and then we can talk about what the appropriate response is."

He said there wasn't a time limit on when the report would be submitted, but he expected it would be within the next few weeks.

In the meantime, Twyford assured New Zealanders and visitors to this country that the Government was doing its best to maintain and improve safety on the roads.

"The entire system does its best and is built to try and manage and make the transport system, in particularly the roads, safe for New Zealanders to travel on," he said.

"But we are constantly fine tuning and trying to learn from experience to make it better."