State Highway 2 is likely to be closed until this afternoon after a petrol tanker rolled south of the small western Bay of Plenty town of Katikati, spilling petrol on to the road.

Firefighters were pouring foam onto the tanker and the petrol.

The Gull tanker overturned near the intersection of Lund Rd and State Highway 2, between Katikati and Tauranga.

Senior Sergeant Ross Bielby, of Tauranga, said the tanker was blocking the road and leaking fuel. A team from the company was on its way to drain the fuel.

The Fire Service has been putting foam onto the tanker and the road since arriving within minutes of the accident.

Scott Osmond, of the Fire Service northern communications centre in Auckland, said a 200m restriction zone was a safety measure.

Firefighters had asked for power to be turned off in the area, also as a safety precaution, Mr Osmond said.

"We haven't got details of the extent of it (the leak) but it is one segment of the tanker that is involved. The rest is sealed up.

The driver was not injured but Mr Osmond said it was not clear why the tanker rolled.

Environment Bay of Plenty had been notified because of the risk of petrol leaking into drains.

The tanker was believed to have been carrying about 30,000 litres. 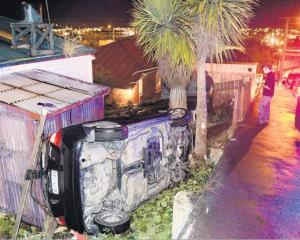