'I have really, really hurt someone' 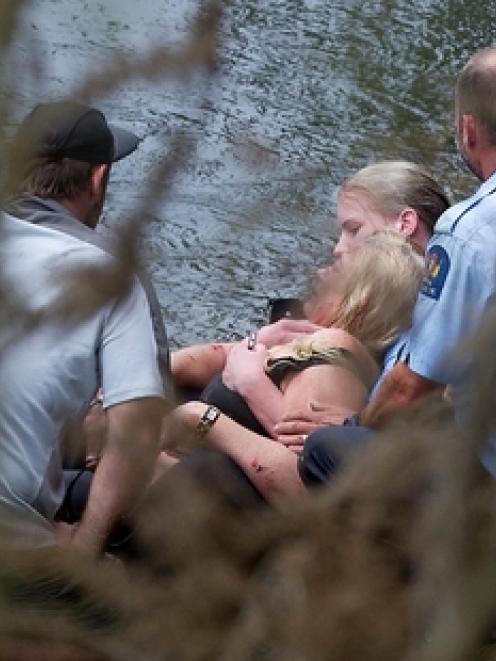 Police officers with the woman after she was taken to shore. Photo / Christine Cornege
A bystander threw himself in the path of a woman who used her car to plough her partner into a footpath before trying to run over him again in Hamilton yesterday.

The woman then left the badly injured and bleeding man and drove away from the scene - before driving over a 10m cliff into the Waikato River.

After freeing herself from her car she told a boatie who took her to safety: ''I have really, really hurt someone.''

The events unfolded outside Merv's Superette about 11.55am, when Kanj Patel heard a couple arguing outside his parents' store.

The 15-year-old said he heard the injured man telling the woman that he was going to leave her ''and then she ran him over''.

''The first time we thought it was just an accident but then the second time we knew it wasn't.''

CCTV footage of the incident shows the woman ploughing into the man on the footpath outside the superette. The motorist then tries to drive over the man again and a middle-aged man runs at the car to try to get her to stop.

The man chases the car as the woman drives off and two other pedestrians go to the man's aid.

Kanj Patel, who had recently completed an advanced first aid course through St John, said the man had ''massive'' cuts on his legs, a large bruise on his tailbone and was bleeding from the back of his head.

''I was shocked and I was shaking but I had to do something to help him.''

He was swearing a bit but we took him a cushion and another person got him a towel for his head and we tried to keep him comfortable.''

The 44-year-old woman then fled the scene, trailed by another motorist who saw the incident and called police.

The woman left the road, and travelled at least 200m across parkland towards a 10m high cliff.

Jahmaine Kati was swimming with his younger brother in the river when he heard the car rev shortly before it plunged over the bank.

''It didn't look like she was trying to stop,'' he said. Mr Kati said the woman somehow managed to free herself from the car as it sank. He said police were on the scene within minutes and officers jumped into the water. A passing kayaker helped the woman to the shore.

He loaded the woman, who had cuts to her hands, and three police officers on board to take them to a boat ramp about a kilometre downstream. ''She said, 'I have hurt someone, I have really, really hurt someone'.''

Police last night could not confirm what charges the woman might face.

Waikato police district on-call manager Acting Detective Inspector Ross McKay confirmed the man, who is in Waikato Hospital with serious injuries, and the woman were in a relationship.

''Sadly, just seven days out from White Ribbon Week, today's incident also highlights the dangers associated with domestic violence and police urge anyone who feels unsafe in their home situation to seek help,'' he said.

By James Ihaka, of the NZ Herald.