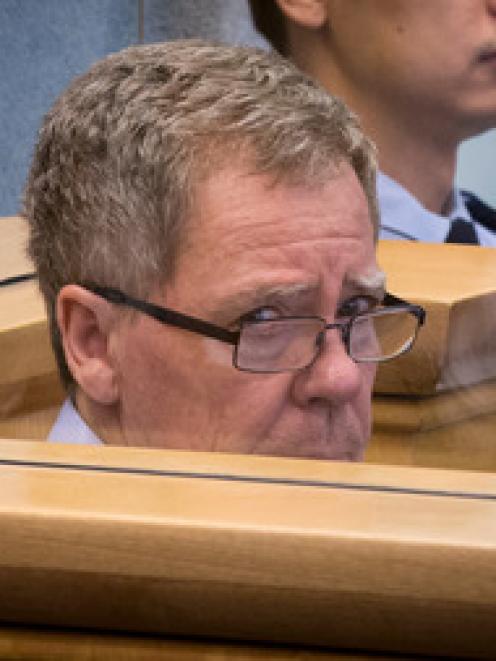 Jeremy Kerr. Photo: NZ Herald
The man who threatened to spike infant formula with 1080 has been jailed for eight and a-half years.

Jeremy Hamish Kerr (60) previously admitted two counts of blackmail and the High Court at Auckland this morning heard the cost of the crime to the country was more than $37 million.

Justice Geoffrey Venning said it was "near the most serious case" of its kind and the man knew his actions would have catastrophic implications.

In November 2014, Kerr mixed highly concentrated amounts of the poison with baby milk formula and posted them to the dairy co-op and to Federated Farmers, with a letter demanding the country stop using 1080 or he would release poisoned infant milk powder into the Chinese market and one unspecified market.

Prosecutor Christine Gordon, QC, said it was unusual for Crown to ask the court to impose a sentence near the maximum available (14 years prison), but that was its stance.

"The nature of the threat, the extent of the loss caused and the defendant's motivation are serious aggravating features of the offending that places [the offending] within the most serious category," she said.

In a pre-sentence interview he told probation that he did not think he would be taken seriously and wished he could take it back.

But the judge said it had "posed a major threat to trading relationships between New Zealand and other countries".

Justice Venning also acknowledged the defendant had suffered difficult personal circumstances when his wife of 30 years died of cancer in 2011.

By March 2015, police had 36 full-time staff on the case, resulting in a $5 million bill for the taxpayer.

Defence counsel John Billington, QC, said an issue that could not be resolved was: "seeking a rational explanation for what's irrational behaviour".

A psychologist's report on Kerr said there was no evidence of him being particularly callous or lacking empathy.

"He wished the whole episode had gone away," Mr Billington said.

The lawyer said Kerr's threats were never going to be carried out and any financial benefit he may have received from 1080 use being ceased would have been "modest".

Kerr denied his actions were financially motivated but after a disputed facts hearing earlier this month, Justice Venning decided Kerr's actions were about money.

Kerr owned a rival pesticide called Feratox, for which he received annual royalties of more than $100,000.

The Crown said he was strapped for cash, his bank accounts were at their maximums, he had extended the overdraft of his mother's account in "questionable" circumstances, and he was struggling to pay his bills.

Fonterra managing director of people, culture and safety Maury Leyland said the company lost more than $20m because of the threats and subsequent response.

"It's hard to imagine a worse threat to children and families," she said.

"It can't be forgotten [the letter] was accompanied by deadly quantities of 1080."

Federated Farmers chief executive Graham Smith called it a "direct attack on the very fabric of our society".

And the Ministry of Primary Industries' deputy director-general regulation and assurance Scott Gallacher discussed the "significant impact" on the country's entire economy.

The ministry's bill came to $4.2m as a result of Kerr's actions.

"It was one of the most challenging responses MPI . . . had ever staged," Mr Gallacher said.

"Complex interactions and negotiations were required on international and domestic fronts."

Had those negotiations not been successful, it could have seen a $7.5 billion reduction in GDP in the 2015 calendar year, he said.

The court heard Kerr had previous criminal convictions but they were not detailed during today's hearing and the judge said they were "limited and not relevant".

The Crown requested a minimum non-parole period be imposed but Justice Venning declined.

LOSS TO THE COUNTRY